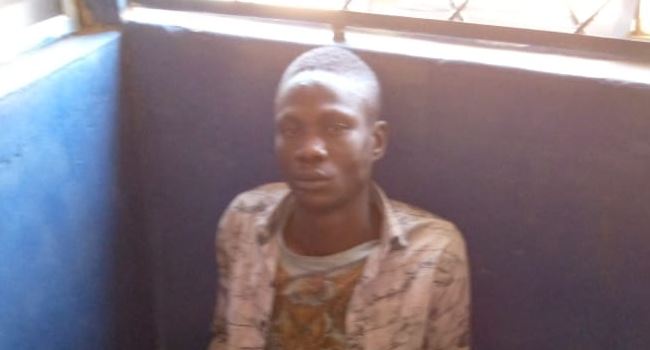 Controversy has continued to trail the identity of the suspect arrested in connection with an alleged attempt at bombing a branch of the Living Faith Church in Sabon Tasha, Kaduna.

Though the police had given the suspect’s name as Nathaniel Samuel, Christian leaders in the country have kicked against it, saying no Christian would ever attempt to carry out such evil plot against a church.

They insisted that the name of the suspect is Mohammed Sanni.

In a video in circulation, in which the suspect was being paraded by the police in Kaduna, the suspect also insisted that his name is Nathaniel Samuel.

The suspect claimed he is supposed to have been a pastor in Living Faith, having concluded a programme at the church’s bible institute, World of Life Bible Institute.

However, a fiery government critic and former Minister of Aviation, Femi Fani-Kayode, said in a tweet on his Twitter handle that whoever believes the claim that the suspect is a Christian named Nathaniel Samuel should have his head examined.

Also in his reaction, the Chairman of the Kaduna State chapter of the Christian Association of Nigeria (CAN), John Hayab, on Monday, disputed claims by the police that the suspect is Nathaniel Samuel by name.

He accused the police of suddenly changing the name of the suspect from Mohammed Sani to Nathaniel Samuel.

Hayab, who insisted that it was the church and not the police that apprehended the suspect, said he gave his name as Mohammed Sanni during interrogation by the church.

He, however, expressed shock that the name suddenly changed to Nathaniel Samuel after he was handed over to the police.