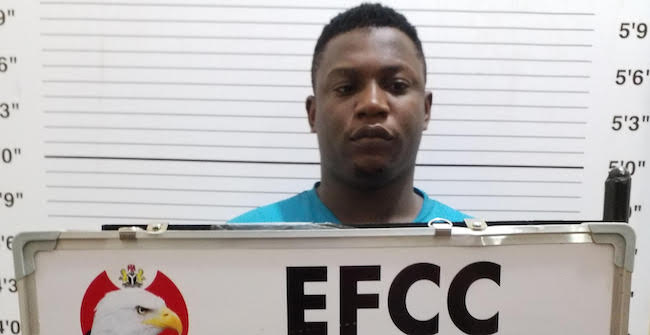 The duo were arraigned by the Economic and Financial Crimes Commission (EFCC) on separate charges contrary to Section 321 and punishable under Section 324 of the Penal Code Law.

The EFCC counsel, Andrew Akoja, called witnesses through whom fraudulent messages printed from the defendants’ phones as well as the device used in perpetrating the crime were tendered.

He urged the court to hold that the prosecution had proved its case beyond reasonable doubt and convict the defendants.

He sentenced Uchena, who claimed to be a Lottery Agent, to one-year imprisonment each on counts 1 and 2.

He also ordered the forfeiture of $200 which the convict raised as restitution and iphone 11 used to perpetrate the crime to the Federal Government.

The judge sentenced Quadri to suspended six months imprisonment each on counts 1 and 2.

He also ordered the forfeiture of the iphone 11 used by the convict for the crime to the federal government.