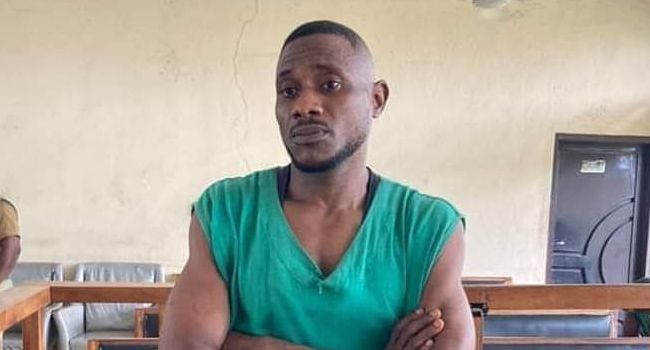 A 31-year-old man, Nsikak Joseph Udofia, has been sentenced to death by an Akwa Ibom State High Court sitting in Ikot Ekpene, after he was found guilty of robbing a cobbler of a torchlight and the sum of N2,350.

Udofia, a native of Utu Edem Usung in Ikot Ekpene local government area of the state, was also sentenced to life imprisonment for raping a 16-year-old secondary school student.

According to the police prosecutor, Udofia with others now at large, “had robbed the cobbler, Gabriel Akpan Victor, of his torchlight, two knives, a roll of black thread, two palm slippers and a cash sum of N2,350 while on his way home from work on 31st December, 2017.”

“Three weeks after the robbery, the convict also raped a 16-year-old SS 2 student in an uncompleted building in Utu Edem Usung, Ikot Ekpene on 21st January, 2018,” the prosecutor told the court.

In a two-hour judgement, the trial judge, Justice Augustine Odokwo, found the accused guilty of the two-count charge, which are punishable under Section One sub-one of Robbery and Firearms Special Provisions Act, Laws of the Federation and Section three-six-seven of the Criminal Code, Cap 38, Laws of Akwa Ibom State, 2000, and duly sentenced him.

The judge held that the prosecution had proved its case beyond reasonable doubt that the accused person committed the offenses.

In the first count charge of robbery, Justice Odokwo sentenced Udofia to death by hanging, while in second charge of rape, he held that Udofia shall serve a life sentence in Ikot Ekpene Correctional Centre, with the sentences running consecutively.