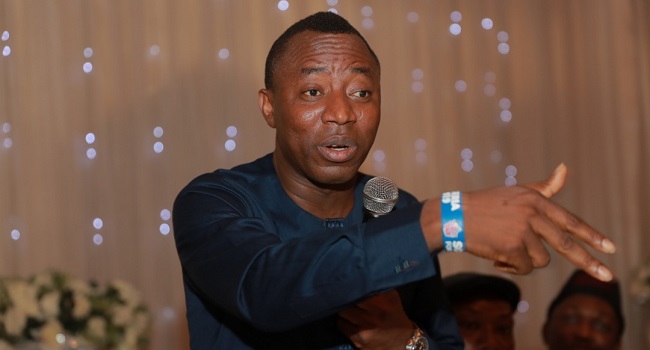 The co-convener of the #RevolutionNow movement, Omoyele Sowore has disclosed that officials of the Department of State Services, DSS, vowed that he won’t walk out of detention alive, if he refused to compromise.

The embattled publisher revealed this on Friday while DSS operatives attempted to re-arrest him and his co-defendant Olawale Bakare in the courtroom of an Abuja Federal High Court.

He said; “Nigerians should know that I’m not going to give up until every Nigerian benefits from a country that is theirs.

“They tried to break me in prison, sent delegations to me offering all kinds of things and I refused. They promised that I would not walk out of their detention alive and that is what they came here to implement today.

“Nobody in Nigeria should be afraid, this is our country and some people have to make the sacrifice for it to be a place of rule, law, and justice.”

There was a mild drama at the court 7, Federal High Court, Abuja, on Friday, as armed operatives of the Department of State Services (DSS) moved to rearrest Sowore and his co-defendant, Olawale Bakare, at the court premises.

The drama started shortly after Justice Ijeoma Ojukwu adjourned the trial till February 11, 12 and 13 for definite hearing.

The court registrar then called the next case for hearing and as everyone began to move out of the court premises, some officers of the DSS, numbering about 15, who had laid ambush for the defendants, started making their way towards Sowore and Bakare.