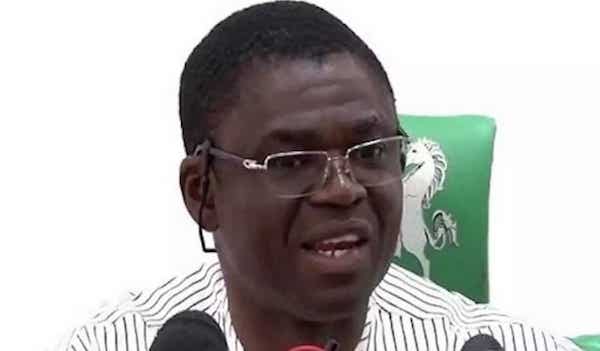 Deputy Governor of Edo State, Philip Shaibu has described the actions carried out by former governor of the state, Adams Oshiomhole, as shameful.

He stated that he regarded Oshiomhole, a former National Chairman of the All Progressives Congress (APC), as a father, but was ashamed of how he has continued to carry himself, in respect of the forthcoming governorship election in that state.

Shaibu stated this while speakimg on Channels Television’s “Politics Today”, during the week.

“I am really ashamed but I want to apologise to Nigerians, you know there’s a certain age you get to, law of diminishing return sets in, I think that’s what is affecting my father but we’d take care of him as a good child, we’d take him to where they can check him medically properly so that he can return to the era where he was wearing khaki. Now he’s putting on safari, I think it has changed his mentality.

“But I want to talk about what he said just now, and I also want to agree with him that the proper name of my boss the governor of Edo state Godwin Obaseki will be reaffirmed on the 19th of September 2020.

Read also: Edo deputy Gov, Shaibu, narrates how he fell out with Oshiomhole

“That is ‘his name is Godwin and God will definitely win in this election, so I want to join him to agree that the proper name of my governor will be reaffirmed on the 19th of September”.

He continued, “I also want to join to agree with Oshiomhole when he was prophesying about those days when he was wearing khaki, when he said nobody can challenge God, and that we must also check the name we give to our children and he attributed to the fact that God bless my governor’s parents for giving him the name Godwin. And that is why God will win as any man that stands in the way of God, that God will punish the person. So I want to agree with him (Oshiomhole) that if he does not support that God will win, then the prayer he prayed will follow him”.

While speaking on the ongoing tension and political events in the state, the Deputy Governor said, “if I must go back to what is happening in Edo State, he’s talking about certificate. I don’t want to go to history, but if I must go to history. Very soon we will know why somebody will be a governor and ministry of education will be burnt down when tribunal is sitting. We’d go back there. Somebody that does not have a certificate can not talk about a man that he alluded to the fact, and he waved his immunity and swore to God that this man went to school.

“Not only that he went to UI, he even went to America, and he helped to set up banks, that he was his brain box and without him he wouldn’t have succeeded for eight years. The same man now is talking the other way.

“I think the lesson here is that we should try not to allow the younger ones to hear what comrade said before and what he is saying now because we would not be sending a good message to our younger ones, because they would see him as a role model, and that role model is not something we should sell to our children where you speak from both sides of your mouth.”

The Deputy Governor maintained that “As far as I’m concerned, in Edo state, Governor Godwin Obaseki has overwhelming support, because he’s not a man that speaks anyhow.