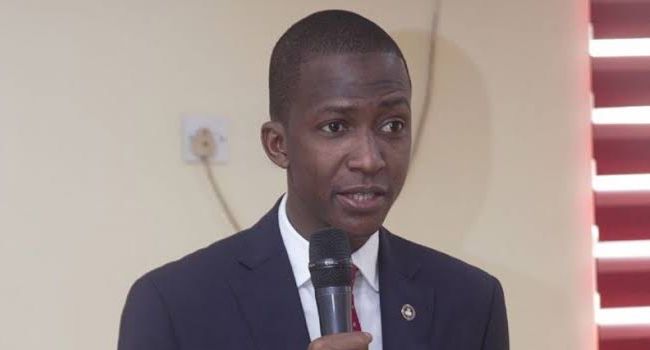 The Economic and Financial Crimes Commission (EFCC), has placed 59 suspects on its ‘Most Wanted List’ over various fraudulent activities amounting to about N435bn, $397 million and €9.9 million.

In a statement on Sunday from the anti-graft agency signed by its Head of Media and Publicity, Wilson Uwujaren, the EFCC said the offences for which the suspects were declared wanted ranged from money laundering to obtaining money by false pretence, fraud, internet-related offences and issuance of dud cheque

The statement also called on anyone with useful information as to the whereabouts of the wanted persons to contact any of the commission’s offices or the nearest police station or other security agencies.

Some of the suspects on display on the EFCC list include a former Personal Assistant to an ex-governor of Kwara State, who allegedly signed for and laundered about N12 billion belonging to the state government.

The suspect was said to have jumped bail granted to him by the Commission and had remained incommunicado since then.

The single biggest crime committed by a suspect was ascribed to one Maxwell, who was declared wanted by the EFCC in an alleged case of conspiracy, obtaining money by false pretence and money laundering to the tune of N213 billion.

He was said to be running a trading and capital company, in which he allegedly defrauded investors of their funds and has been on the run since the bubble burst on him.

Another suspect on the list is a Nigerien identified only as Hima, who the Commission declared wanted over alleged criminal conspiracy, contract scam, misappropriation of public funds, money laundering and fraud to the tune of $394m, €9.9m and N369m.

He was alleged to have received the sum for the purchase of equipment for the Nigerian military but it was later discovered that there were discrepancies in the supply of the equipment.

Similarly, four officials of the Rivers State Government comprising three men and one woman, were declared wanted by the commission over suspected N117bn fraud, alleged criminal conspiracy, money laundering, and misappropriation of public funds and abuse of office.

Also, a native of Plateau State, identified as Noel, was declared wanted in a case bordering on conspiracy, theft and money laundering to the tune of N131m. He was said to be a former staff of First City Monument Bank in Birni Kebbi, Kebbi State.

Also on the list is a female banker from Ondo State who allegedly forged a customer’s documents and fraudulently obtained N27m loan facility using the customer’s fixed deposit as collateral for the loan, while another female banker from Ogun State allegedly forged treasury bills certificate worth N27m and gave them to a customer in exchange for the money.

An Israeli identified as Doron, was also declared wanted for obtaining money under false pretence, stealing and forgery just as a female contractor was declared wanted for allegedly collecting aircraft parts worth $1.4m from a Russian company and evading payment.

Uwujaren said though some of the cases are already being prosecuted in various courts, some of the suspects have jumped the administrative bail granted to them by the EFCC.