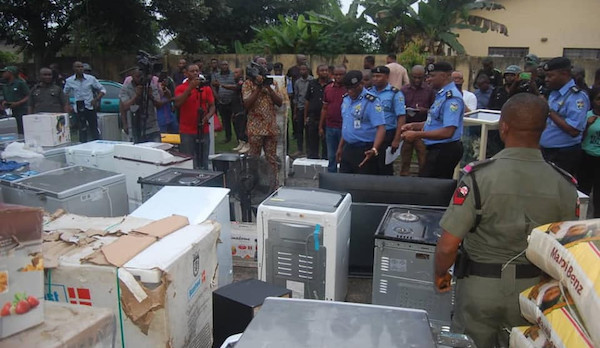 The Akwa Ibom State Police Command on Friday confirmed the arrest of 10 suspected hoodlums over their alleged involvement in the looting and destruction of properties during the #EndSARS protests in the state.

The state’s Commissioner of Police, Amiegheme Andrew, who disclosed this to journalists at the command’s headquarters in Ikot Akpan Abia, said police also recovered stolen properties worth millions of naira from the hoodlums.

He said: “It is with a heart full of pains that I address you today (Friday). The events of the last 24 hours have given me and every concerned Akwa Ibomite a great course for concern. As the lead agency in internal security, we have great respect for peaceful protest and we have acted professionally during its progression in the state.

“I have visited all the said places today with my Deputy Commissioner of Police, Operations, DCP Auwal M. Mohammad, and have made an on-the-spot assessment of damages done.

I commend the State Government’s timely intervention through the imposition of curfew as I today went round to ensure strict compliance, and we will continue to do so.

“Gentlemen of the press, I’m however delighted to inform you that our quick deployment of Anti-Riot Policemen in conjunction with the efforts of sister security agencies such as the army and DSS, and the efforts of the state government has restored normalcy in Uyo and the state in general.”