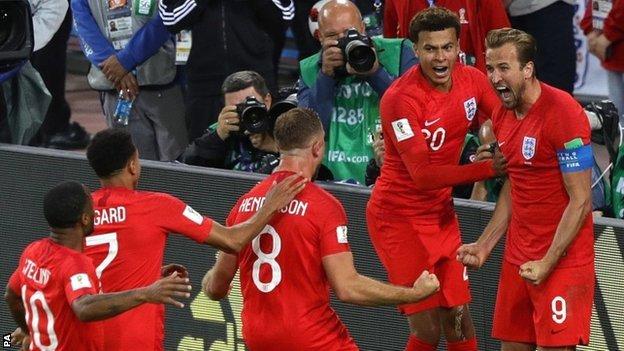 England have secured a spot in the quarterfinals of the 2018 FIFA World Cup after beating Colombia on penalties in their round of 16 clash on Tuesday.

Eric Dier scored the winning kick after Jordan Pickford’s brilliant save from Carlos Bacca’s attempt to seal a 4-3 shootout win.

This is the fourth time the Three Lions have gone into a penalty shootout at the World Cup, and this is their first ever win.

Against West Germany in 1990, against Argentina in 1998 and against Portugal in 2006, they lost, but picked up the historic victory over Colombia in Russia 2018.

After a goalless first half, Harry Kane put England ahead when he converted a penalty – his 6th goal in the tournament – after he was fouled by Carlos Sanchez in the box.

The Three Lions thought they were heading to victory before Colombia stunned them with a stoppage-time equaliser from Yerry Mina which forced the game into extra time.

Extra time was goalless but some good chances were missed. Both teams held on and headed to penalty as England carried the day.

The win for England means they play Sweden in the last eight of the competition.