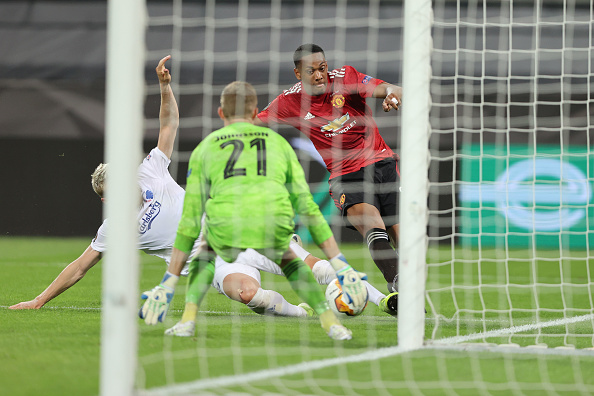 The Europa League final-eight has kicked off in Germany, with Manchester United and Inter Milan fighting their ways through to the semi-finals.

While United defeated Copenhagen in extra time after a goalless 90 minutes, Inter saw off Bayer Leverkusen 2-1 to advance.

Former Super Eagles forward, Odion Ighalo was on bench all through the game for the Red Devils.

It was Bruno Fernandes who converted a penalty in the 95th minute to seal the victory against Copenhagen, who had held the favourites at bay in Cologne.

United had earlier had a penalty overturned and a goal ruled out by the Video Assistant Referee, with Fernandes and Mason Greenwood also each hitting the post and Marcus Rashford having another effort disallowed.

The Ole Gunner Solskjaer side will now go on to face the winner of Wolves vs Sevilla in the last four.

In the other quarterfinal game in Dusseldorf, Serie A giants Inter zoomed into the last four after beating their Bundesliga counterparts.

Leverkusen went behind in the 15th minute, and got further behind in the 21st minute and were trailing 2-0 before they earned some hopes in the 24th minute.

Both sides played with hope for more goals all through, but the scoreline never changed.

Romelu Lukaku bagged a record as he scored for a record ninth consecutive Europa League game.

Former Super Eagles forward, Victor Moses was a 60th-minute substitute for Inter, who are now only two games away from winning their first trophy since the Coppa Italia in 2011.

The Antonio Conte side will face the winner of Shakhtar Donetsk v Basel in the semi-final on 17 August.

FG charges Nigerians on safety measures as COVID-19 deaths near 1,000

PDP lifts suspension of senator, six others in Kaduna