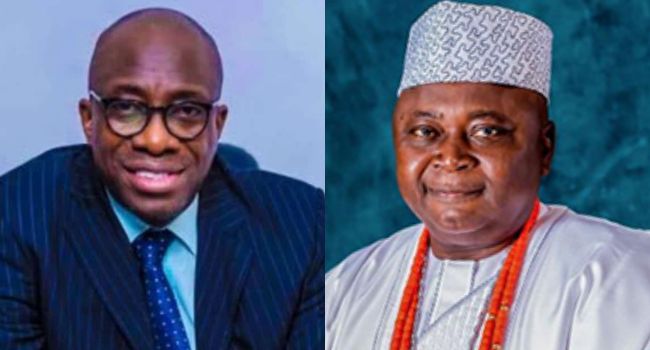 The imbroglio in Ogun state chapter of the Peoples Democratic Party (PDP) took an unexpected turn on Tuesday when the Federal High Court in Abeokuta nullified the May 25 primary elections of the party in the state, and sacked all candidates produced by the elections.

The People’s Democratic Party (PDP) in Ogun State which had been enmeshed in crises since its parallel primary elections on May 25. The state chapter of the party held two governorship primaries on the same day, producing two candidates.

While a faction of the party held the election at the National Union of Journalists (NUJ) Secretariat in Oke Ilewo, Abeokuta, the other faction voted at the Olusegun Obasanjo Presidential Library (OOPL) also in Abeokuta.

The election which took place at the NUJ Secretariat and presided over by Hon. Abayomi Daniel produced Segun Showunmi as the party’s governorship candidate. In the election held at OOPL, supervised by Akase Sorkaa, Hon. Oladipupo Adebutu was declared winner, and he was backed by the national leadership of the party.

The Independence National Electoral Commission upheld the choice of the national leadership of the party – Adebutu, while Sowunmi and other aspirants approached the judiciary to seek redress. Before the Primaries, Showunmi had approached a Federal High Court in Abeokuta, accusing the state executive council of the party, led by Sikirulahi Ogundele, of “bias, conflict of interest and breach of trust”.

Respondents to Showunmi’s suit included the Ogundele-led state working committee, the National Working Committee, and Ladi Adebutu whom he asked to clarify a claim that his (Adebutu) nomination form was purchased by state executive members of the party.

He prayed Justice A. A. Akinyemi to dissolve the State Working Committee led by Ogundele for “purchasing nomination form” for an aspirant in violation of their oath of office. He also sought an interlocutory injunction restraining the Ogundele executive from conducting the ward and State congresses. The High Court dismissed Showunmi’s suit on the ground that it lacked jurisdiction. However, the Appeal Court faulted the dismissal.

The Tuesday judgment was given in a suit filed by three members of the party, Taiwo Olabode-Idris, Kehinde Akala, and Ayinde Monsuri, challenging the authenticity of the delegates’ lists used to conduct the primaries. Respondents in the suit included Adebutu, PDP, and INEC.

The plaintiffs argued that the list was imposed on the voters by the party excos, as the delegates who voted were not democratically elected at the ward, local government, or state congress.

Hon. Justice O.O Oguntoyinbo in his ruling nullified the primary elections and ordered the party to conduct another one in 14 days.

Justice Oguntoyinbo affirmed that only delegates validly voted at the 30 April 2022 Congresses can vote at the primaries by virtue of 84(5)(b) and PDP Guidelines, saying the party can’t alter or depart from the result of those congresses.

Ripples Nigeria gathered that some members of the party jubilated upon learning about the ruling. The members are those loyal to Segun Showunmi and Jimi Lawal, two aggrieved governorship aspirants of the party.

However, the State Chairman of the party, Sikirulah Ogundele urged members of the party to maintain calm while it studies the judgement and take appropriate actions as advised by its legal team.

He expressed confidence that the party would overcome the legal obstacles and focus on preparing for the 2023 general elections.

Also, Adebutu urged his supporters to remain calm, saying “there is no cause for alarm”.

In a statement by his media aide, Afolabi Orekoya, shortly after the High Court judgement, he said he would consult his legal team in order to take the necessary action.

“The pronouncements did not vitiate nor disregard the PDP State Executive led by Hon. Sikirulai Ogundele which conducted the primaries that led to the emergence of Hon. Adebutu and other candidates that were confirmed authentic and recognised by the Court as well as the national leadership of the Party. Therefore, our teeming supporters, Party faithful and the good people of Ogun State need not to entertain any fear,” he was quoted in the statement.

He should be noted that Adebutu lost his chance of becoming governor in 2019 due to his legal fisticuff with late Senator Buruji Kashamu.