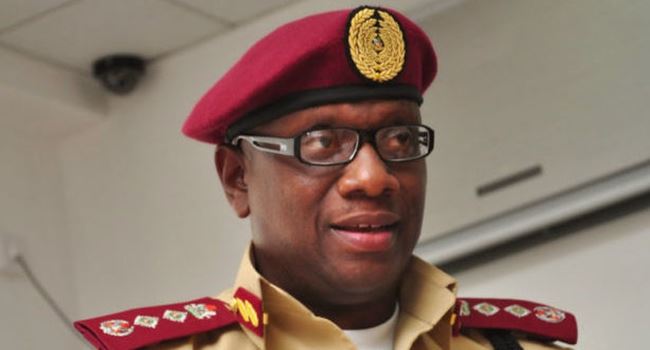 The Corps Public Education Officer, Bisi Kazeem who disclosed this in a statement on Sunday in Abuja, said the redeployment affected one Deputy Corps Marshal (DCM) and six Assistant Corps Marshals (ACM).

He said: “Those affected are – DCM Hyginus Fomsuk, formerly the Assistant Corps Marshal in charge of Command Administration and Strategy at the FRSC National Headquarters, Abuja.

“He was recently appointed to a new rank of Deputy Corps Marshal in charge of Special Duties and External Relations.

“The erstwhile Zonal Commanding Officer, Zone RS10HQ, Sokoto, ACM Kayode Olagunju, is to take over in the same position at RS4HQ Jos.

“Other officers affected are- ACM Imoh Etuk, the erstwhile ZCO RS7HQ, Abuja who has been moved to take over the affairs of Zone RS2HQ, Lagos.

Oyeyemi added that ACM Ismaila Kugu who was until now the ACM in charge of Administration at the FRSC National Headquarters would now assume duty as the new Zonal Commanding Officer in charge of Zone RS10, Sokoto.

The FRSC spokesman implored the officers to remain steadfast in their new posting and rededicate themselves to the challenges of moving the Corps to greater heights in line with the prevailing circumstances in the country.

324 Nigerians to arrive from Cyprus, Turkey