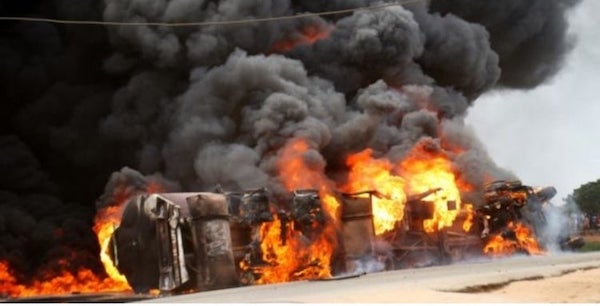 At least three persons including a woman, her daughter and a vulcaniser suffered varying degrees of burns after a petrol tanker fell and exploded at Ijaiye-Tutun, Abeokuta North local government area of Ogun State on Friday.

The victims were rushed to the Federal Medical Center in Idi-Aba, Abeokuta, for medical attention.

The victims were Ashimiyu Otunba, Risikatu Otunba and her daughter.

At least five houses, several shops, and a mosque were razed by the ensuing inferno.

Eyewitnesses told journalists that the incident occurred when the fuel tanker suffered a flat tyre.

One of the eyewitnesses, who preferred to speak under the condition of anonymity, said the tanker was trying to negotiate a bend on the road when it tilted and fell by the roadside.

She said: “The tanker had a flat tyre and in the process of trying to fix it, the tanker exploded and even the vulcanizer who was to work on the tyre was affected.

“The vulcanizer was fixing a motorcycle tyre when the tanker exploded.

“Many houses were affected with some razed down completely. In fact, a mosque was also affected.”

Nigerian govt to use Abacha’s loot for critical projects, Bagudu will get nothing – Malami