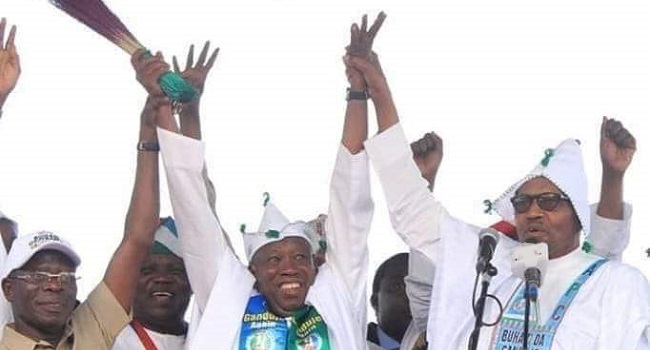 He also said Ganduje enjoys immunity from prosecution as a sitting governor.

The president noted that the alleged videos allegedly showing Ganduje stuffing dollar bribes in his pockets had become a matter already in a law court.

Buhari was reacting to criticisms that he shields his political associates like Ganduje, among others, from prosecution unlike the opposition..

At the All Progressives Congress rally in Kano, Buhari raised the hand of Ganduje, a sign of endorsement for his second term bid before supporters.

In a statement by his Senior Special Assistant on Media and Publicity, Garba Shehu, in Abuja on Thursday, the President dismissed the criticisms.

The statement said some high-profile persons, including a former Secretary to the Government of the Federation and a former state governor, were being prosecuted for corruption.

The Executive Secretary of the National Health Insurance Scheme, Prof. Usman Yusuf, was also cited as another government official serving administrative leave to pave the way for investigation into corruption allegations levelled against him.

“Despite some of the suspects being close to the President, he had not shielded them from investigation, administrative suspensions and prosecution”, the statement added.

Specifically, on Ganduje, the Presidency said, “as a sitting governor, (he) enjoys immunity from prosecution in his own right.

“Furthermore, under Nigerian laws, a suspect is presumed innocent until proven guilty in a court of law.

“In the circumstances, the matter is in court and the President has no power to dictate to the court or the Kano State House of Assembly, which is already investigating the matter, about what to do with the allegations against Ganduje.”

Related Topics:'Ganduje innocent until proven guilty in a court of law'- Buhari#gandujegate2019APCBuhariGandujeKano
Up Next