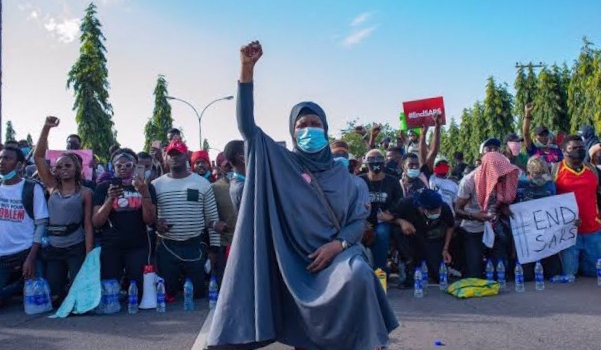 Every October 20th will remain indelible in minds of Nigerians, especially the youths, as the date reminds them of the historic #ENDSARS protest, a youth-driven anti-police brutality demonstration, that shook the very foundation of the country.

What began in Lagos as a call to end police brutality and extrajudicial killings soon metamorphosed into a movement that swept across major cities in Nigeria.

For the first time, Nigerian youths stood together to not only protest the incessant harassment, unfair treatment, arbitrary arrest and detention, extortion, violation of their rights, as well as extrajudicial killings of Nigerians by the notorious police arm known as the Special Anti-Robbery Squad (SARS), the protesters also presented a five-point agenda which included the disbandment of the team.

Part of the demand included compensations for the families of those who died under police brutality and the release of arrested protesters.

They also demanded the government to improve the welfare of police officers with the belief that they will not take out their frustrations on Nigerians.

Another key demand was the proscription of SARS, and though the Federal Government acquiesced to the request and announced the disbandment of the unit, it also announced the establishment of the Special Weapons and Tactics (SWAT) team to replace SARS.

The protest which started as a social media campaign, spilled into street demonstrations in October 2020, without a central leadership structure coordinating the protests in different parts of the country.

The protest also became a platform for demanding government’s decisive action against insecurity, corruption, economic woes and perceived maladministration blamed for the suffering of the majority of Nigerians and lack of opportunities for the youth.

From Lagos to Port Harcourt, from Benin to Jos, from Abuja to Ibadan, Nigerian youths were not relenting despite threats by the security forces.

In Lagos which was the epicenter of the demonstrations, the government did everything possible to frustrate the protesting youths and cow them into submission, including allegations of releasing thugs on them but the more they tried, the more resilient the demonstrators became.

Then came October 20, 2020, when soldiers were deployed to the Lekki tollgate where the youths had gathered in continuation of the protest.

With many of them holding the Nigerian flag and singing the national anthem, the soldiers allegedly opened fire on the youths, with many of them said to have been killed, and scores more sustaining injuries.

Despite several denials by the Nigerian government, the Army, and the Lagos State government, that no lives were lost, videos and claims abound, largely from unverifiable sources claiming that Nigerian youths were mowed down at the tollgate.

Different state governments in efforts to calm frail nerves set up probe panels to provide answers, uncover whatever lies existed and hopefully provide closures for the youths and a stunned nation in mourning.

We take a look at questions raised for which answers have not been provided; those who emerged as heroes from the #EndSARS protest, and those who are viewed by Nigerians as villains from the fallout of the historic protest.

Despite the trauma, harassments and intimidations they faced during the protest, seeing their fellow protesters allegedly shot at by soldiers, Nigerian youths were big winners of the #ENDSARS protest.

The resilience, doggedness and the undying spirit of Nigerian youths was brought to the fore when they stood up to their perceived oppressors and resisted every intimidation as they fought for their rights.

They were ready to die fighting for what they believed in. They were determined to have a better society and country. They will be remembered for their resilience.

They may have lost the first battle, but they set a mark for the new Nigeria that we all seek.

The #EndSARS protest has also galvanised Nigerian youths into a movement which has created a consciousness with youths now more aware of their place in the Nigerian political space.

Another set of Nigerians who became winners as a result of the #EndSARS protest were the activists and influencers who inadvertently led the demonstrations through their coordinated efforts and their ability to galvanize Nigerian youths into taking their destiny in their hands.

Activists like Aisha Yesufu, musicians like Tuface, Falz, P-Square, Davido, Burna Boy, and comedians like Mr. Macaroni, Bovi and a host of others were winners in the protests as they put their reputations on the line to support the protesters, in confronting the government and the entrenched system.

The whole #EndSars brouhaha was started by men of the police force in the first place.

Officers of the Special Squad which was set up in the first place to tackle the menace of armed robbery in the country, practically abandoned their core duties and rather concentrated its efforts in harassing and brutalising young Nigerians, especially the successful looking ones.

They became a law onto themselves, extorting Nigerians at will, torturing and killing many innocent Nigerians in the process.

SARS became losers in the October 2020 protest when the then Inspector General of Police announced the scrapping of the unit in the heat of the protests.

The Lagos State Governor, Babajide Sanwo-Olu also came out looking a loser from the whole saga.
He had tried every means possible to curb the protests, and imposed a curfew in desperation. Though well intentioned, this was the boiling point of the historic protest, which has caused the unhealed wound the nation and its youth continue to lick.

He also did not help matters with his initial denial of knowledge of how the military got involved to quell a civil unrest.
Sanwo-Olu entered a lot of bad books after he first denied that no one was killed at the Lekki tollgate, which he later recanted.

The Lagos State government under Sanwo-Olu did not also cover itself in glory with the handling of the panel report. Though it seemed the government wanted to provide answers and heal broken hearts by setting up the #EndSARS panel, events following submission of the report suggest that the state government had a pre-determined result it wanted from the panel, and not the truth of what actually transpired. The report has been confined to the shelves since then.

The Nigerian Army was also a losers in the end game by releasing soldiers who allegedly shot live bullets at unarmed Nigerian youths.

The soldiers were accused of disrespecting the national flag, the national anthem as well as their rules of engagement by firing at the protesters.

To make matters worse, the Army hierarchy gave different versions of what transpired at the Lekki tollgate.

After initially denying shooting at the youths, the Nigerian Army recanted by saying they only shot blank bullets into the air, before claiming their officers were pelted with stones, hence their resolve to shoot into the air.

Perhaps the major ‘villain’, at the onset of the protest, President Muhammadu Buhari, typically, decided to remain aloof and did not take proactive measures expected of a leader by coming out to address the youths.

When he eventually spoke, he said the protesters were sponsored by enemies of his government who wanted to overthrow him.

Some of these questions begging for answers are:

1) Who ordered the deployment of soldiers to the Lekki tollgate on October 20, 2020 to quell a civil unrest?

2) Who gave the order to the soldiers to shoot at the unarmed youths?

3) What has become of the White Paper presented to the Lagos State govt by the ENDSARS panel?

The questions are still begging for answers to put a closure to an event that continues to hurt many Nigerian youths, hence a repeat does not occur.
Will Nigerians ever get answers to them?