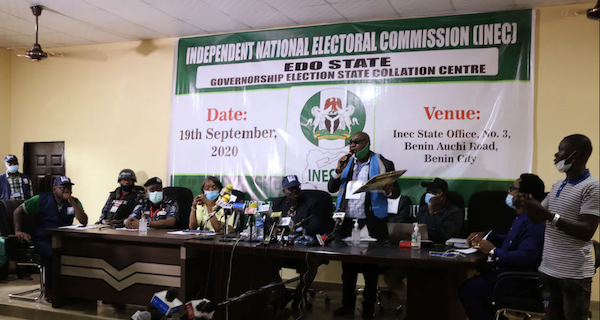 The Collation Officer in Etsako Central Local Government Area (LGA) of Edo State, Professor Godswill Alan Lukman, on Sunday disclosed that an official of the Independent National Electoral Commission (INEC) was shot in the area during the governorship election in Edo State on Saturday.

Lukeman, who stated this when he gave a situation report on the exercise in ETSAKO Central at the collation centre in Benin City, added that the shot official was critically injured as a result.

He said the victim was rushed to a hospital in the state, where he was receiving treatment.

According to him, the gunshot incident followed a violence that erupted at the venue of the election in the area.

Lukeman also said that another INEC ad-hoc official was cut in the face.

The attack, he said, was staged by some hoodlums, suspected to be political thugs, who stormed the venue and disrupted the exercise.