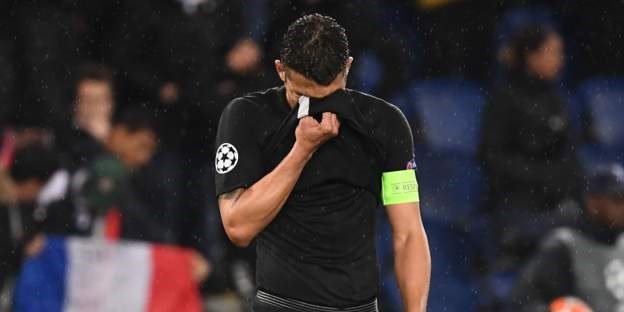 The captain of Paris St-Germain, Thiago Silva was in shock after their defeat at home to Manchester United in the Champions League on Wednesday night.

Having won 2-0 in the first leg at Old Trafford, the French champions were in command of the tie, and the odds were in their favour to go through to the quarterfinals.

But a brace by Romelu Lukaku and a late penalty by Marcus Rashford ended their dreams as Manchester United won 3-1 to gallantly advanced to the last eight with higher away goals.

Speaking after the game, Silva asked fans to forgive his side after a relatively poor performance that led to their exit from the competition – again.

“It’s difficult to speak. It’s a shame. We played very well over there, but here we didn’t do the things we talked about before the game,” he said.

“We were on a good run and yet again it ends here. That’s football. Nothing worked today. I ask our fans to forgive us.”

Recall that only two seasons ago, PSG beat Barcelona 4-0 in the first leg at this same stage only to crumble to a 6-1 defeat in the second leg at the Nou Camp.

The result tonight (Wednesday) is Thomas Tuchel’s side first home defeat of the season and ends their eight-game winning streak in all competitions.