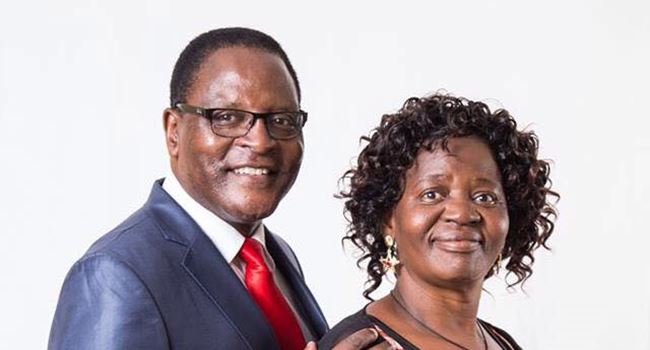 The President of Malawi, Lazarus Chakwera has revealed the rationale behind his decision to travel with his family to a virtual conference in London.

Chakwera further slammed allegations of nepotism by critics over his decision.

Ripples Nigeria had reported that the President incurred the wrath of his country after he flew out to the United Kingdom to attend the Global Educational Summit hosted by British Prime Minister, Boris Johnson.

According to media reports in the country, Chakwera was said to have traveled to London for the summit owing to a bad internet connection in his country which could affect his participation.

Meanwhile, in explaining his decision to travel with his family, the President said his daughter was included in the delegation to take care of his wife who is not feeling well, and to give physical support

Chakwera made this clarification during a BBC Hardtalk interview with Sarah Montague.

When asked why his wife, daughter and son-in-law were on the team, even when his foreign minister were left out, he said;

“Each member of the delegation has a specific function and provides services that justify their presence at the summit,” he explained.

Responding to a question from Montague on the inclusion of his wife in the London delegation, the President said, “Everyone has a responsibility. I brought my wife because I needed her.

“I have done virtual conferences before and this was an appeal for me to be present personally. I also brought Malawians who are also valuable.

“Each one in my delegation has a specific function and I need their services”, he said.