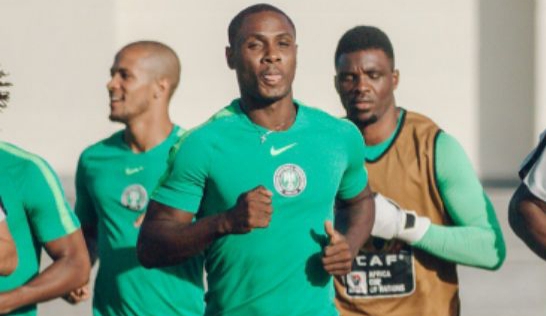 Super Eagles coach, Gernot Rohr says team striker, Odion Ighalo will be in his starting lineup when they face Guinea on Wednesday.

Late substitute Ighalo scored the only goal of the team’s opening game at the ongoing Africa Cup of Nations (AFCON) to claim all three points against Burundi.

The former Watford of England forward did emerge as the highest goalscorer during the qualifiers with seven goals, as Nigeria qualified with a game left.

With the other teams of group B, Guinea and Madagascar, playing a 2-2 draw in their opener, the Eagles are now one win away from sealing their spot in the round of 16.

Rohr’s men will today (Wednesday) take on the Syli Nationale at Alexandria Stadium in Egypt for their second group game.

“Definitely, Ighalo is very fit and he will start the game against Guinea,” Rohr told media at the Alexandria Stadium.

Ighalo, 30, had been hampered in recent weeks by the muscle injury he picked up while in action for Shanghai Shenhua, as Denmark-based Paul Onuachu started ahead of him against Burundi.

Rohr added: “It is a very important match because if we win this game, we are already through, so it will be a decisive game for us and for them.”

The game will kick-off at 3.30 pm Nigerian time.