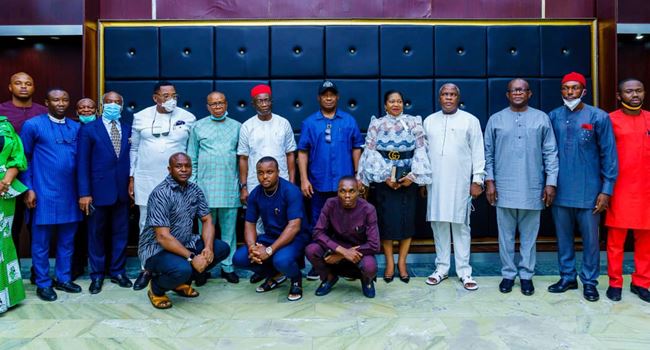 The judicial panel of inquiry set up after the #EndSARS protests to probe various acts of police brutality and human rights abuses in Imo State has recommended about N770 million compensation to victims.

The Chairman of the panel, Florence Duroha-Igwe, a retired judge of the state High Court, disclosed this in a statement on Wednesday while announcing the submission of the panel’s final report to the state governor, Hope Uzodinma.

Citing the report, Duroha-Igwe said the total N770,985,800 was recommended by the panel to be paid as compensation by the government, while the sum of N39.1 million is to be refunded by individual policemen.

Speaking on the panel’s findings, she noted that the panel discovered that the issue of police brutality runs deep in the country.

“From our investigation, it is clear that cases reported to and treated by us are just a tip of the iceberg,” she said.

She noted that many others “are still living in self-denial as to the possibility of their missing loved ones still being alive even after 20 years.”

“They still hope that their loved ones will walk in through the door from police detention one day,” she added.

Meanwhile, the panel received a total of 145 petitions and nine memoranda, however, of the 145 petitions, the report stated that 45 petitions submitted involved death, 36 of which pertained to death caused by policemen and nine by soldiers.

Also, of all petitions received, only 102 were successful while others were struck out for different reasons, including want of jurisdiction, lack of merit, and for being sub judice.

Mrs. Duroha-Igwe advised that the report of the panel should be promptly implemented to restore the confidence of the public in the government’s ability to right the wrongs.

“Your Excellency, we urge that the report of this Judicial Commission of Inquiry should be implemented promptly to restore the confidence of the public in the ability of the government to right the wrongs, correct the errors of the past, and allow the dead to rest in peace.

“There is the need for the government to embark on mass enlightenment of the citizens on their rights as it concerns the operations/functions of the police and to encourage the citizens to take action and to call out any infringement of their rights.

“The government should also upgrade the facilities and increase the capacity of the judiciary for quick dispensation of justice.

“We do not pretend that our findings and recommendations are adequate, but we hope that they will go some way to assuage bruised feelings and smoothen roughened feathers,” she added.