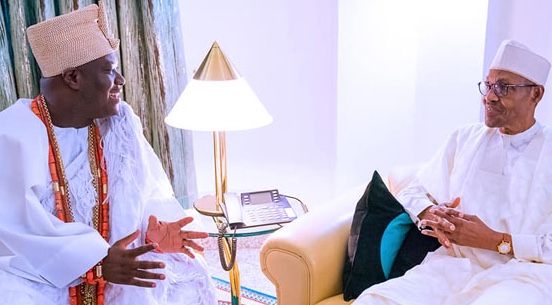 The Ooni of Ife, Oba Adeyeye Ogunwusi, on Thursday declared that challenges posed by insecurity in the Southwest geopolitical zone is real.

According to the monarch who spoke to State House correspondents after meeting with President Muhammadu Buhari at the Presidential Villa, Abuja, security challenges in the country are alarming. He, however, declared that the Southwest does not want war.

Oba Ogunwusi, who spoke on behalf of other traditional rulers from the zone, revealed that most rural communities in the Southwest have been occupied by strange people.

The Ooni also explained that the traditional leaders are worried and are prepared to work with the government as they called for a reinforcement of federal apparatus to defend themselves from people he described as bad eggs who may not all necessarily be Fulanis.

The monarch also called on those beating the drums of war and politicians escalating issues to stop forthwith, adding that such acts are capable of causing anarchy.

The Ooni also disclosed that President Buhari assured him that he will reveal his own side of the story on the issue of Ruga settlement as the issue has been taken out of context and that firm and unwavering action is required to put the security threats under control.