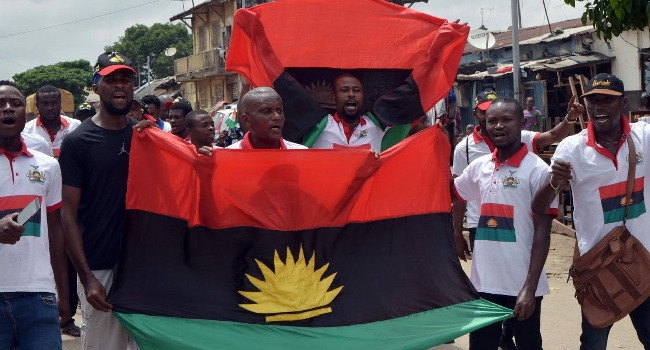 The Igbo separatist agitators specifically blamed the 82 Division Enugu and 6 Division Port Harcourt of the Nigerian Army of being responsible for the killings which have been attributed to the Biafra group.

In a statement by IPOB’s Media and Publicity Secretary, Emma Powerful and made available to Ripples Nigeria on Tuesday, the group alleged that the two commanders of the Army Divisions were “specially assigned to the two Divisions to carry out sinister objectives.”

“We, the global movement of the Indigenous People of Biafra, IPOB, under the leadership of Mazi Nnamdi Kanu, wish to inform the general public particularly, Biafrans, as well as the international community, that the 82 Division Enugu and 6 Division Port Harcourt and their Commanders are the people behind the deployment of Fulani terrorist herdsmen who have escalated the recent killings and kidnappings that are going on in the two states of Enugu and Rivers States.

“The two Commanders were instructed to ensure Fulani herdsmen take over of South East and Rivers State and to prepare the ground for the Fulani cabal to rig the forthcoming election and the mass killings in the two states will not stop until they are removed.

“They were assigned to the Nigerian Army’s 82 Division Enugu and 6 Division Port Harcourt Rivers States for two sinister objectives:

“Firstly, to spread Fulani and Boko Haram terror in Biafraland and secondly, to prepare the ground for the Fulani cabal to use them and the Army in rigging the forthcoming Nigerian selection process called an election.

“Our superior intelligence reports have shown that the 82 Division Enugu and 6 Division Port Harcourt and their Commanders are responsible for Fulani/Boko Haram murderous attacks in Enugu and Rivers States respectively.”