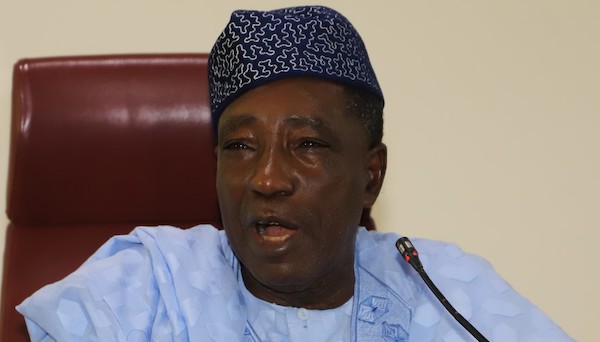 The Federal Government on Tuesday explained to the Senate how it intends to spend the 995million euros and $1.5 billion loan request.

According to the Minister of Agriculture and Rural Development, Sabo Nanono, the loans will help to ensure food sufficiency and for infrastructure development across the 36 states and the Federal Capital Territory (FCT).

The Minister was speaking when he appeared before the Senate Committee on Local and Foreign Debt, as the Committee chaired by Senator Clifford Ordia, requestef for more details

He noted that part of the plans is to purchase 20,000 tractors in the next six years for mechanised agriculture from its 995million euro loan request now before the Senate.

“These plans are geared towards food security in our country millions population which will hit about 400 million in about 40 years from now.”

He said, “the Green Imperative, which is a bilateral agreement with Brazil, will involve procurement of 20,000 tractors in the next six years to ensure their availability for hire to smallholder farmers in the country”

“The country as it is today is in deficit of 60,000 tractors, the reason why the Ministry is planning for procurement of 20,000 tractors at 10,000 units each every three years.

However, members of the committee, expressed concerns about the initiative, noting the lack of a cohesive plan by the government to achieve its target of mechanised farming.

Specifically, Senator Oriolowo who is an Agricultural Engineer by profession told the Minister that based on personal experience, the plans the Minister unveiled may not yield the desired results.

“The tractors you are planning to bring from Brazil will in no distant time, run aground by people who are not trained to effectively use such machines as it happened in Osun and Borno States recently.

“Capacity building is very important for people to be engaged in the mechanised farming, which we didn’t hear from your presentation, and besides, are you in touch with the real farmers who, if involved, will make the project impactful?

“Beautiful plans like the ones you have just unfolded, are not new in this country.

“Please rejig the plans to be in tune with productivity needs of the real or rural farmers if you don’t want the loan to go down the drains,” he said.

Also present at the interactive session was the Permanent Secretary of the Ministry of Finance, Aliyu Ahmed and the Director-General of the Debt Management Office (DMO), Mrs. Patience Oniha.

The Committee directed the Minister of Agriculture, DG of DMO and the Ministry of Finance to furnish it with more details about the loans to aid its consideration and approval.

This directive by the Committee followed the apparent failure of Nanono and Mrs Oniha, to give the Committee satisfactory answers on the preparedness of the Federal Government for the loans meant for Agricultural Mechanization across the 774 Local Government Areas in the country.

On the $1.5billion external loan for the 36 State Governments and the Federal Capital Territory to execute critical infrastructure to check the the economic impact of the second wave of the COVID-19 pandemic, the Committee Chairman, Ordia, asked the DMO chief to furnish the Committee with the credit the worthiness of the states, which she did not provide.

The Committee however resolved that the DMO’s DG must furnish it with the information on the credit worthiness of states before it approves the loan.

“We have listened to the presentations made by the Minister of Agriculture on the need for the approval of the 995million Euro loan and the Permanent Secretary, Ministry of Finance, Aliyu Ahmed, on the need for the approval of a $1.5billion loan meant for the 36 States and the Federal Capital Territory, but the required details of the infrastructure projects to be executed must be made available before approval,” he said.

FG to charge companies N100,000 for every tv/radio advert not produced in Nigeria