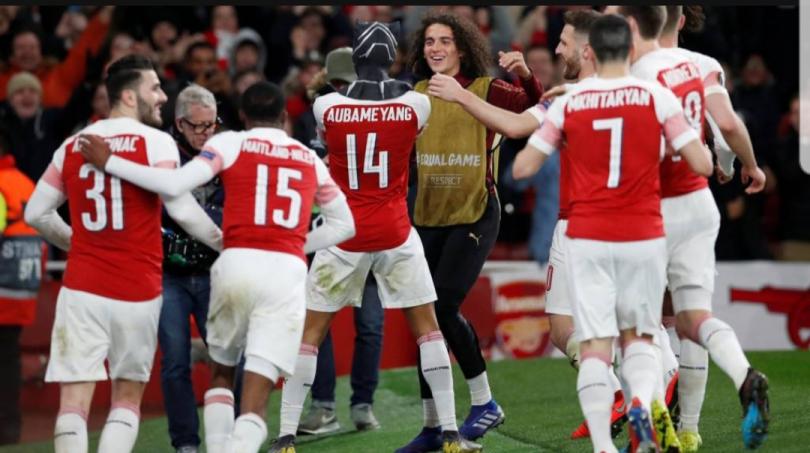 Super Eagles forward, Alex Iwobi was in action for Arsenal, who overturned a 3-1 deficit to reach the Europa League quarterfinals on Thursday.

The Gunners trailed from the first leg at Stade Rennes, but put up a fine performance at the Emirates Stadium as they won 3-0 over the French side.

Iwobi played a sub role and made some impacts after coming in for Alexander Lacazette, but it was Pierre-Emerick Aubameyang who scored twice to spur the team in fulfilling their quest. 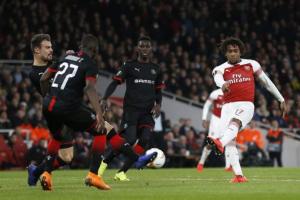 Alex Iwobi made impacts as a sub

Trailing 3-1 from the first leg, Arsenal ran into the lead when Aubameyang fired in Aaron Ramsey’s cut-back five minutes into the game.

The Gabon striker then set up Ainsley Maitland-Niles before half-time to put the hosts on their way to the last eight.

Then 18 minutes to time, Aubameyang added a third goal as he poked in Sead Kolasinac’s low cross to seal off a resounding victory for the Unai Emery side.

It is the second successive season Arsenal have made it through to the last eight – they were knocked out in the semi-finals last year following a 2-1 aggregate defeat by Atletico Madrid.

Earlier on Thursday, Olivier Giroud scored a hat-trick as Chelsea thrashed Dynamo Kiev to move into the Europa League quarter-finals with an 8-0 aggregate win.

The French forward has not scored in any other competition than the Europa League since November 2018.

He opened the scoring five minutes into the game and doubled their lead on 33 minutes.

Alonso tapped in a third goal just before half time from Callum Hudson-Odoi’s cross before Giroud scored his third of the night and Hudson-Odoi completed the 5-0 thrashing.

Chelsea had won 3-0 at home in the first leg, and the win away at Kiev sealed a 8-0 thrashing as they move to the last eight.

The draw is billed to hold on Friday.