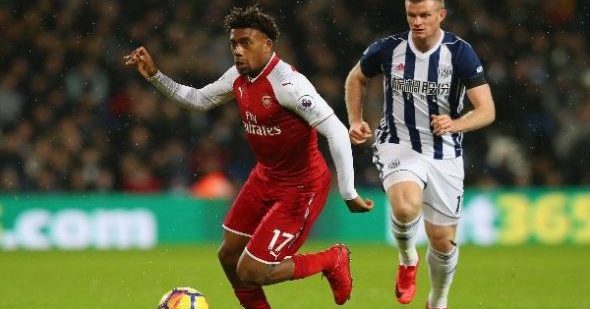 Super Eagles forward, Alex Iwobi was on from the start as Arsenal were held to a 1-1 draw by West Brom in a Premier League encounter on Sunday.

Iwobi, who was rested in the last fixture against Crystal Palace which they won 3-2, replaced Mesut Ozil in the Gunners’ starting XI at the Hawthorns.

After the opener in the 83rd minute in favour of Arsenal, Jay Rodriguez’s controversially awarded late penalty denied Arsene Wenger’s side the chance to put pressure on the teams ahead of them in the league table.

It was Alexis Sanchez’s free-kick that beat keeper Ben Foster via a heavy deflection off James McClean to put Arsenal ahead before the referee penalised Calum Chambers six minutes later which led to the equaliser.

Arsenal move three points behind fourth-placed Liverpool while West Brom climb off the bottom of the table on goal difference.

Meanwhile, the fixture marked Arsene Wenger 811th Premier League game in charge of the Gunners, making him the manager with the most games ever in the competition, surpassing Sir Alex Ferguson’s 810 games.