Home » Sports » Joshua vs Povetkin Showdown: All you need to know 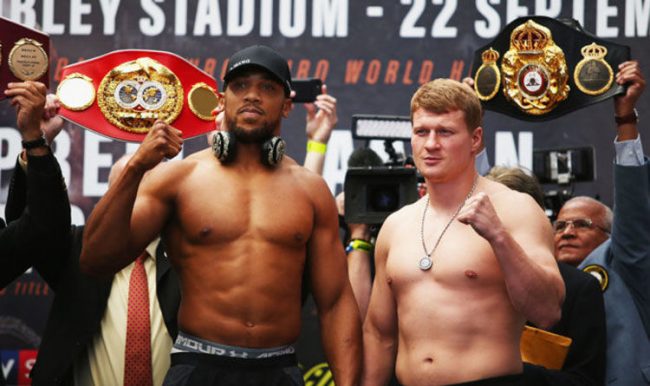 Povetkin is the mandatory challenger to Joshua’s WBA title and the Briton will also be defending his WBA Super, IBF, WBO and IBO belts.

The fight will take place at Wembley Stadium in London, UK, where Joshua defeated Wladimir Klitschko in April 2017.

38-year-old Povetkin was the WBA champion from 2011 to 2013 and is now the WBA’s mandatory challenger, meaning Joshua has to fight him or face being stripped of his title.

Povetkin has suffered only one defeat since his professional debut in 2005 when he lost by unanimous decision to Wladimir Klitschko in Moscow in 2013.

He also boasts 24 knockouts from his 34 wins, while 10 have ended in his favour by unanimous decisions.

“The battle for the World title has always been my goal. I fought for the moment to face the strongest in the world and on September 22 I get my opportunity. Anthony Joshua has four belts and I want them all,” Povetkin has said.

Meanwhile, 28-year-old Joshua is undefeated in 21 fights – 20 of which he won through knockouts.

The fight tonight will be a meeting of two former Olympic champions, as Povetkin was the winner of super-heavyweight gold at the 2004 Athens Games while Joshua won the same title at London 2012.

Joshua holds three of the four major world titles – the IBF, WBA and WBO – with Deontay Wilder’s WBC belt the only thing remaining for him to become undisputed heavyweight champion.

“I can’t wait to get back in the ring – the end of March (when he fought Joseph Parker in Cardiff) feels a long time ago now. Povetkin is a serious challenge that I will prepare meticulously for. He has serious pedigree and only a fool would underestimate what he brings to the table,” Joshua has said.

Ultimately, the fight at Wembley has a reported £26m purse with Joshua expected to take home up to £20m while Povetkin will receive £6m.