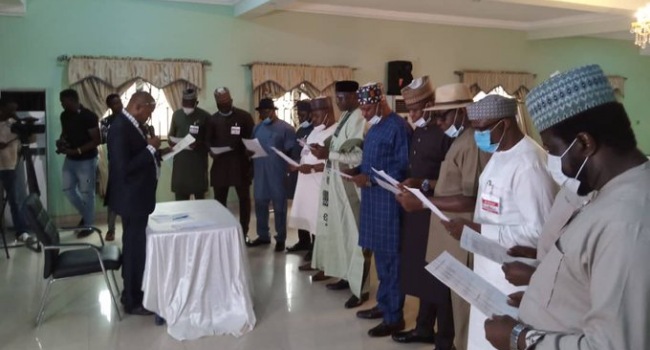 The 14 lawmakers of the Edo State House of Assembly who were left out during the inauguration of the assembly have been purportedly sworn-in in Benin, the state capital.

The newly-sworn in lawmakers, including three others who had earlier sworn allegiance to Osagie Ize-Iyamu, after the ceremony which held at a private residence in Benin, declared that the Speaker, Francis Okiye and his deputy, Roland Asoro were impeached.

At the event, the 14 lawmakers were the first to be sworn-in before the other three that recently joined Ize-Iyamu, the governorship candidate of the All Progressives Congress (APC) followed.

The development came hours after security operatives invaded and took over the Edo State Assembly.

The state governorship election being contested majorly by the ruling Peoples Democratic Party (PDP) and the APC, which is in control of the central government, is slated to hold on September 19.