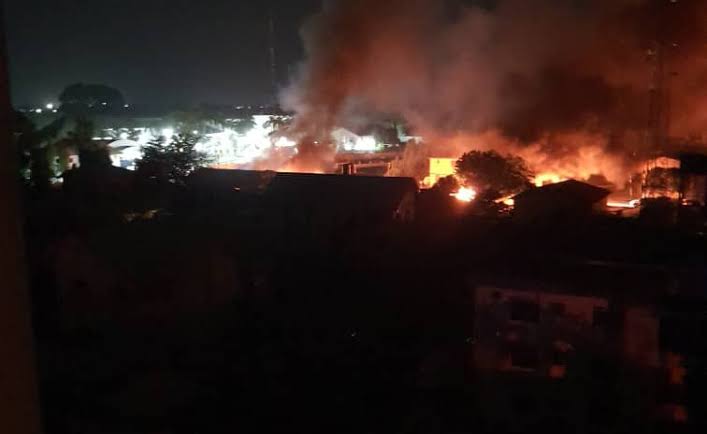 The Owerri Correctional Service Centre reportedly set on fire after hoodlums were said to have bombed the facility on Monday, setting hundreds of inmates free in the process.

It was gathered that the hoodlums took advantage of the calm atmosphere of Easter to invade the centre.

The attack, according to security sources, came as confrontations intensified between Nigerian security forces and the Eastern Security Network (ESN), the security arm of the proscribed Indigenous Peoples of Biafra (IPOB) across the South-East region of the country.

Videos of the attack and eye witnesses account on social media said the attackers struck the centre and a nearby police post shortly after midnight, freeing a number of inmates while heavy gunfire was heard as the gunmen engaged police officers in an exchange.

Though the actual number of inmates who escaped during the attack is yet to be ascertained, Amnesty International had, over the weekend, put the number of inmates in the facility at 2,156 inmates as against its installed capacity of 548.

The Imo State Police Public Relations Officer (PPRO), Orlando Ikeogwu, who confirmed the attack in a brief chat with Ripples Nigeria, said though the command is yet to get the details of the attack, the state Commissioner of Police, CP Nasiru Mohammed, has deployed police personnel to ensure maximum security during and after the Easter celebration.

“Though I am yet to get details of the attack as I also heard about it like you have, the Commissioner of Police, Nasir Mohammed, has deployed a crack team of well trained officers to the area to ensure peace is maintained,” Ikeogwu said.

The level of destruction and casualty figures were not immediately available, but pictures and videos shared on social media showed heavy smoke billowing from the scene of attack, with gunfire which was said to have lasted for more than two hours.

JAMB warns operators of cybercafés, tutorial centres on use of logo