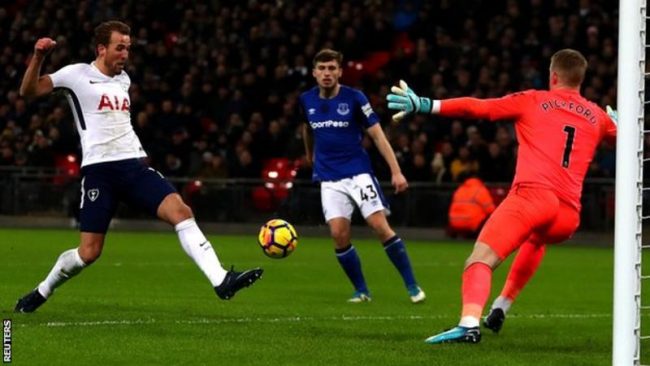 Tottenham striker, Harry Kane scored twice in a 4-0 victory over Everton at Wembley on Saturday to become the club’s record Premier League goalscorer.

The England international twice netted from close range– converting passes from Son Heung-min and Eric Dier– to take his Premier League tally to 98, one more than Teddy Sheringham scored for Spurs.

It was Son who opened the scoring in the 26th minute by finishing off Serge Aurier’s cross, before Kane set off the second half with his brace.

Christian Eriksen then smashed in a fourth from the edge of the penalty area after a fine backheel from Dele Alli exactly nine minutes to stoppage time.

With today’s efforts, Kane has now scored 20 times in the League this season, three more than any other player, and has hit 28 goals in 28 appearances in all competitions.

Spurs ​are now on 44 points but remain fifth on the table, while Everton, 27 points, sit on 9th spot.​