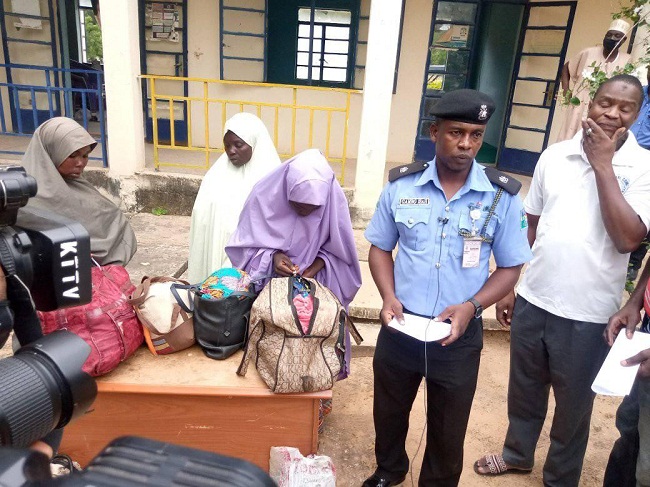 Three female suspects who were allegesly in the illegal business of supplying petrol to bandits in Katsina State, have been arrested by a team of policemen along the Katsina-Jibia road of the state.

According to the State Police Public Relations Officer (PPRO) SP Isah Gambo, the suspects, a mother, her daughter, and another female accomplice, were arrested on Thursday allegedly on their way to supply fuel to bandits in the forest.

A statement by the police spokesman, said the suspects who were paraded at the State Police Command, have already confessed to the crime.

Gambo said the suspects, all residents of Malali Quarters in the Katsina metropolis, allegedly committed the offence in “contravention of the executive order and other extant laws of the federation.”

“The women were arrested along Jibia-Katsina road with bags pretending to be normal travellers going to Magama in Jibia, a border town with Niger Republic.

“What they do is engaging in smuggling of petrol to bandits in Jibia forest but nemesis caught up with them and they were arrested with the exhibits.

“The exhibits were not just travelling bags but they were loaded with petrol meant to be taken to the forest for the bandits.

“The suspects are Umma Bello, 45 years, of Malali Quarters here in Katsina metropolis, Nusaiba Muhammad, 16 years, and Dija Umar 50 years, all of the same address.

“It may interest you to know that the suspects, while confessing to have committed the offence, also revealed that many of them in the area are involved in the business.

“What they do is to engage the services of ‘okada’, motorcycle riders, to buy the fuel for them in their motorcycle tanks from filling stations and then take it back to Malali quarters.

“There, they siphon the fuel from the motorcycle tanks and then arrange them into bags to avoid the eagle eyes of the security agencies while taking it to the forest to sell to bandits,” SP Gambo said.

Military vows to flush out ISWAP insurgents from Nigeria