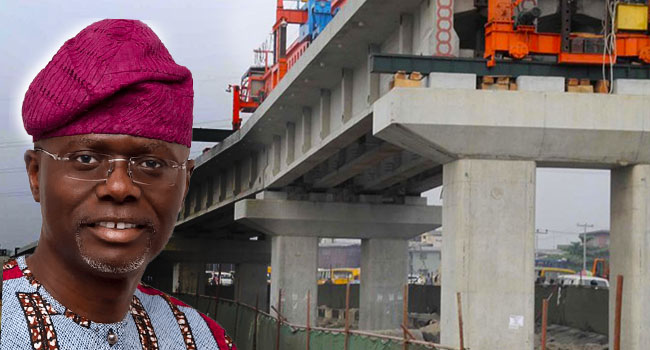 Another governor, another promise of a metro line to cure Lagos of its perennial traffic problem, but this promise is just one of many projects virtually every governor of the state has sold to Lagosians to polish their administrations.

The promise of a metro line didn’t start with Governor Babajide Sanwo-Olu. It is an old wine in a new bottle presented afresh by every governor. Yet, the idea has outlived every one of them – including the brain behind the idea, Lateef Jakande – without hitting the complete stage.

Four to seven years, that’s the period of time other African countries spent to set up their metro system, but Lagos State has been selling the dream of a modern transport system for more than 17 years, through three different political parties; Unity Party of Nigeria (UPN), Alliance for Democracy (AD) to Action Congress (AC) party and now All Progressives Congress (APC).

What you need to know about Lagos metro line

Sanwo-Olu recently stated that the metro system will be colour-coded in two sets; red and blue; Blue Line (Okokomaiko to Marina); Red Line (Agbado to Marina via Iddo and Muritala Mohammed International Airport) – while it will convey 34.5 million people per month, cutting travel time by 250 per cent.

“There will be a city-wide network of colour-coded Metro Lines, the first two of which – Red and Blue lines – will move over 34.5 million people monthly, cutting travel time by over 250 percent.” Sanwo-Olu made the disclosure during Ehingbeti Lagos Economic Summit on Tuesday, calling on investors to key into the plan for the next decade.

The first time the idea of a metro system was raised was in 1983 by Jakande, with completion date for the first phase set for 1986. His administration couldn’t achieve the dream due to military coup headed by Muhammadu Buhari, which put an end to democratic rule, as well as to Jakande’s ambition.

After many years, as governance returned to civilian rule, Tinubu raised the banner for the continuation of Jakande’s metro system under its administration’s Lagos Urban Transportation Project in 2003, but never completed the project till he left office in 2007.

Fashola reiterated the same promise in 2008, changing the timeframe for completion to 2011, as the project began in 2009. Fashola again changed the timeframe to 2013, then changed it again, promising completion before the end of his tenure in 2015. It never came to fruition before he left office.

Ambode took over from where his predecessor left off in 2015, informing Reuters that completion date for the metro line first phase will be 2016. But just like previous governors, he failed to live up to his promise after serving a four-year term.

Sanwo-Olu didn’t disappoint, as he also sold the same line to Lagosians, soon as he assumed office – fixing 2020 as completion date for the Blue line, while operation is to start this year according to reports. But Lagos State commissioner for Information, Gbenga Omotosho, told Ripples Nigeria the Governor never made such a promise.

But regardless, Sanwo-Olu has continued the trend, stating at Ehingbeti Lagos Economic Summit, that the metro line is part of Lagos State’s infrastructural ambition for the next decade.

Will Sanwo-Olu succeed where his predecessors failed?

In an interview with Ripples Nigeria, Omotosho said the promises will end with Sanwo-Olu, as the governor, who has been in the midst of COVID-19 storm and EndSARS protest-aftermath, plans to deliver the Red and Blue metro lines before the end of his first term.

“If you go to Marina for example, you will see that the rings are up for the blue line. They have passed the most difficult part which is water. And now they are working on ground. The plan is that by next year, we are going to have a test run.” Omotosho revealed.

He further disclosed that funding for the red line has been obtained 100%, putting the capital raised at N100 billion, while funding of the Blue line is still being worked on, but work hasn’t stopped on it.

“And the red line has started. The red line that will go from Oyingbo to Agbado or Agbado to Oyingbo, it has started, and we have secured 100% funding for that one, so funding won’t be a problem.

“So the blue line and the red line, the two of them will be ready most likely at the same time.”

He added that, once the government is able to conduct test run, all that is needed is to perfect everything, and work begins. Omotosho also explained that COVID-19 slowed down work on the metro project last year.

While Lagos has failed to complete its metro project within 17years, the likes of Addis Ababa in Ethiopia and Cairo in Egypt delivered metro lines to their residents within five to seven years of construction.

Cairo began to build theirs in 1982, a year before Lagos announced its plan, completing its 43-km long metro system in 1989 – years later, Egypt has expanded the length with additional lines two and three built by Vinci Construction Grand Projects of France.

How Buhari made Nigeria lose amount worth a metro system

Jakande budgeted N689.45 million for the 28.5-km Lagos metro line project (30 trains) after granting French consortium, INTERINFRA (having initially tendered N590 million) for the contract following a back and forth with Japanese consortium, MITSUI, due to inconsistency in their pricing demand.

But Buhari’s military regime terminated the project, causing a breach of contract on the part of Lagos and Nigeria. This action caused INTERINFRA to drag Nigeria to Arbitration Court of the Chamber for International Trade in Europe, seeking FF1.4 billion for damages.

The amount was later reduced to FF650 million following pleas from Nigeria. This fine is almost equivalent to the N689 million charged by INTERINFRA to build the project, according to Bola A. Akinterinwa’s Nigeria and France,1960-1995: The Dilemma of Thirty-five Years of Relationship, Vantage Publishers, 1999, p.159 et s.

Nigeria paid N600 million for damages, coupled with the N75 million for the preparatory works, total amount paid to INTERINFRA was over N675 million, just for terminating the construction of a metro system worth about N689 million.

According to recent checks by Ripples Nigeria, the least cost to set up a metro system is $200 million to $500 million per mile outside United States – where it cost between $600 million to $1 billion.

Financing of the Red and Blue metro lines at this period of rising inflation wasn’t revealed, but Tinubu’s metro line proposal was tied to $135 million, and in 2010, $182 million was disclosed by China Railway Construction Corporation for the same project.

During the same period, Lagos State reportedly budgeted $1.2 billion as project cost for the blue line, according to Railway Technology. While in 2020, N153 billion was approved by the Lagos State House of Assembly for the construction of the Red and Blue lines.

How delay is costing Lagos

Lagos is a traffic-prone state where residents lose several man-hours to road congestions. The traffic problem of Nigeria’s economic hub has also contributed to the high cost of living within the state.

This means the metro lines would have been a major revenue source if completed as promised in the last two decades. It would have also contributed to the ease the rate of unemployment in the country and there would have been no need to scrap the bike-hailing market (which caused thousands of job loss), because it wouldn’t exist.

It is true that Rome wasn’t built in a day, but it didn’t take over 17-years to build a room, nor does it take that long to construct a metro system.