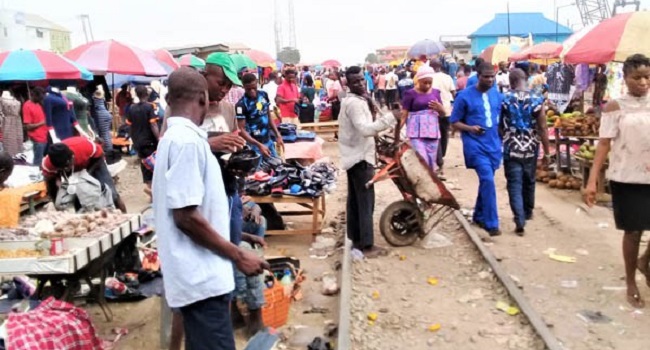 The Lagos State Government has ordered that traders on rail lines across the state be evacuated.

The government said it had recorded deaths of people along the rail lines especially ones who were not quick enough to leave the lines for oncoming trains.

A statement made available to newsmen on Sunday by the Head, Public Affairs Unit, Lagos State Task Force on the Environment, Adebayo Taofiq, said illegal traders on railway tracks including Oshodi, Mushin, Ikeja Along, Yaba, Oyingbo and Agege would be arrested and prosecuted.

The statement further warned officials of Local government and market associations against collecting fees from these defaulters.

He stated, “Strategically, this unusual and very risky trading practice has led to the death of some people, especially those who were not quick enough to leave the tracks for oncoming trains.

“The primary responsibility of any responsible and responsive government is to protect lives and properties of the people.”

Meanwhile, the government has also vowed to rid the state of miscreants and hoodlums as it has directed the Commissioner of Police, Edgal Imohimi, through the head of the task force, Olayinka Egbeyemi, to carry out a raid on all criminal hideouts in the state.

Consequently, the 23 arrests were made in a raid on Shitta area of Surulere while substances suspected to be Indian hemp were recovered

Taofiq blamed the increasing number of thugs and hoodlums among youth in the state on lack of parental upbringing.