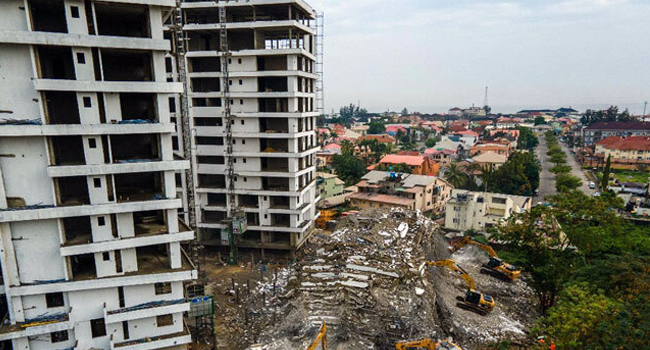 Investigations regarding the collapsed 21-storey building on Gerard Road, Ikoyi, have been completed as the Lagos State Government announced it would prosecute Fourscore Homes Limited, the real-estate firm mired in the disaster which occurred on November 1, 2021.

This was contained in a statement issued by the Lagos State Government on Thursday following a recommendation submitted on January 5, by the panel chairman in charge of the investigations, Mr. Toyin Ayinde, a town planner, who blamed the collapse on the erosion of professional ethics and disregard for due diligence.

The collapsed building had led to the death of 40 persons which also included the owner of the firm, Mr. Femi Osibona.

In the White Paper, the Lagos Government further revealed that demolition exercises would be carried out on the remaining buildings because they failed structural integrity tests.

Also recommended to face administrative disciplinary panel is all government officials involved in granting approval to the developer in 2019.

The White Paper was prepared by the Lagos State government on the report submitted to it by the panel that probed the building collapse.

Twenty-six out of the 28 recommendations contained in the Report were accepted by the government.

The government accepted the recommendation that Fourscore Heights Limited must be prosecuted due to the loss of lives from the tragedy.

The state government has since directed the Office of the Attorney-General and Commissioner for Justice to institute appropriate charges against the company.

The White paper reads, “The developer, having been negligent, is to forfeit the project site to the state government, in accordance with section 25(4) of the revised LABSCA regulation 2019.

“All the various participants, including civil/public servants, found culpable are to face disciplinary actions and prosecution, where applicable.

“This included all those that were involved in the 2019 approval of the collapsed building. The civil servants are to first face the personnel management board, in line with the public service rules. The disciplinary process is to be set up immediately and concluded within 14 days.

“Apart from civil servants, some professionals have also been referred to the professional bodies for disciplinary actions. The list here included engineers, town planners, and architects; while some companies have also been referred to the Architects Registration Council of Nigeria for disciplinary actions for their roles in the collapsed building. Besides this, some indicted companies such as the urban primer have also been blacklisted for the roles they played in the tragedy.

“The three town planners who authored a report using a consultancy firm’s name and claiming it was the firm that signed the papers for the collapsed building – all done without the knowledge of the firm’s owners are to be prosecuted for preparing a consultant’s report through a dubious method.”

The government also accepted the recommendation that an audit exercise must be undertaken periodically by high-level professionals in order to ensure the integrity of buildings across the state.

Hisbah Board arrests 78 for alleged immorality, indecent dressing in Kano