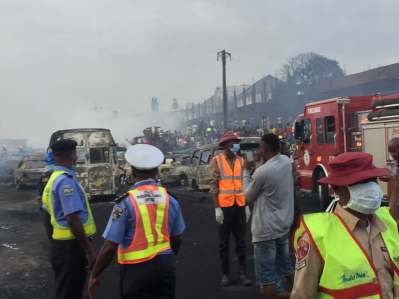 Tragedy struck in Lagos on Thursday as petrol tanker exploded following an accident, leading to the burning of several vehicles and the killing of some people.

The petrol tanker went up in flames close to the Otedola Jubilee Estate on the Lagos-Ibadan Expressway.

Following the ghastly accident, the Lagos State Traffic Management Agency (LASTMA) said over 20 vehicles were burnt in the accident.

“A tanker which had break failure loaded with PMS caught fire on the Otedola Bridge INW Berger. The number of vehicles affected is 20+, Traffic Situation is @ a stand still, all alternative routes advised ATM” the agency said on its Twitter handle.

He said “On getting to the scene of the incident it was discovered that a Mack tanker truck loaded with 33 liters of Premium Motor Spirit (PMS) moving inward Berger at about 5:23pm, fell and spilled its content on the road resulting into fire outbreak.

Read also: WHO reveals new drug to save bleeding mothers during childbirth, as 70,000 die yearly

“Further investigation by the Lasema Response Team. Unfortunately 9 bodies were confirmed dead and recovered from the scene (8 adults and 1 minor) and 4 persons sustain various degrees of injuries and taken to the hospital. A total number of 54 vehicles were completely burnt as a result of the inferno.

Meanwhile, President Muhammadu Buhari has expressed his condolences to the people and government of Lagos State. His new media aide, Bashir Ahmad, tweeted, “President @MBuhari sympathizes with the Government and people of Lagos State, and the victims of the tanker fire incident at the #OtedolaBridge. May the souls of the dead rest in peace, and may God comfort all those who lost loved ones. The entire country mourns with you”.

IBADAN: 5 feared dead in clash between policemen and butchers