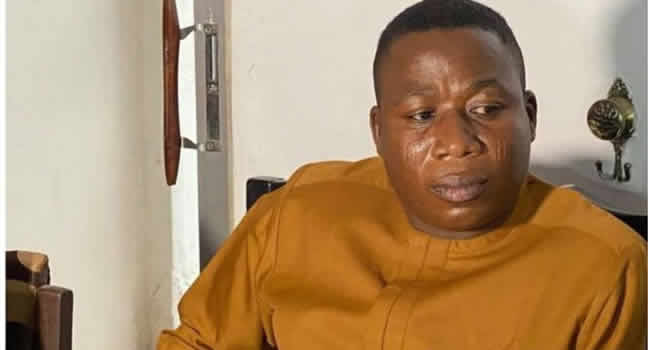 A legal practitioner, Pelumi Olajengbesi, who is one of the lawyers to Yoruba Nation agitator, Sunday Igboho, has debunked viral reports that the freedom fighter was arrested by security operatives at an airport in Cotonou, Benin Republic, while trying to escape to Germany.

Olajengbesi who said the stories of the arrest were cooked up by the Directorate of State Services (DSS) to cover up its inability to arrest Igboho, said his client willingly surrendered himself to the Nigerian government for the sake of peace and safety of his supporters and family.

Olajengbesi who reacted to the rumoured arrest on Tuesday via his Facebook page, said there was no way the DSS could have arrested Igboho after so many failed attempts.

“Igboho was not arrested in the true sense of the word. Yes, he is with the security services, I can confirm that but contrary to the DSS’s cooked up stories, he was the one who surrendered himself for the sake of peace.

“We are making efforts to ensure that he is fine. You know the Department of State Services declared him wanted. We just believe that Sunday Igboho is not the problem. He is someone who believed that the Yoruba people and Nigerians generally should live in peace wherever they are.

“As a matter of fact, let me tell you now that Igboho was ‘arrested’ simply because he wanted to make himself available to the government.

“If not, Sunday Igboho is not someone who can be arrested that way. But because he believes that the journey to justice for the Yoruba people and for the Nigerian state to be able to live in peace may be needed for him to be available, that was why.”

Igboho was declared wanted by the DSS on July 1 after he escaped a raid on his residence in the Soka area of Ibadan, Oyo State, where 12 of his aides were arrested while two were shot dead.

While declaring him wanted, the DSS spokesman, Peter Afunnaya, had advised Igboho to turn himself in to the nearest security.

“Those cheering and eulogising him may appeal to or advise him to do the needful.

“He should surrender himself to the appropriate authorities. He or anyone can never be above the law,” Afunnaya had said during a press briefing.