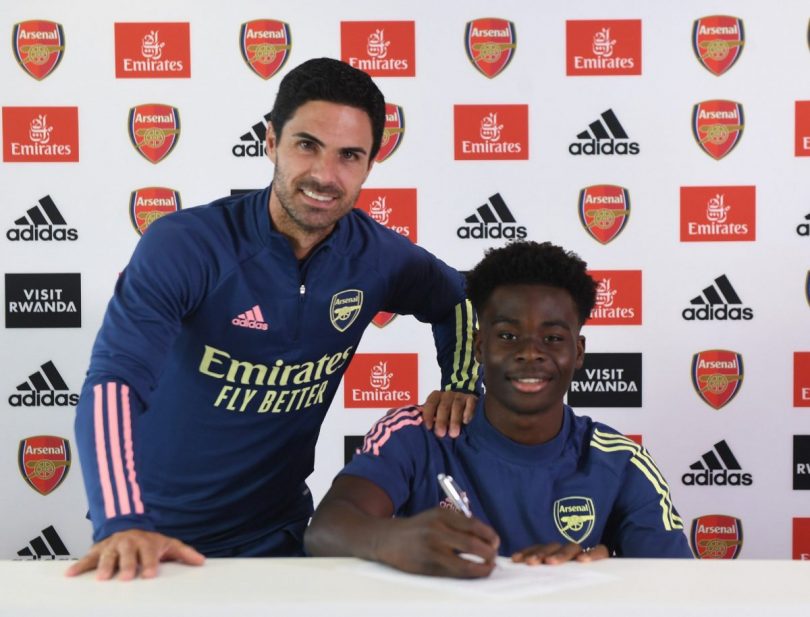 Arsenal youngster of Nigerian roots, Bukayo Saka has signed a new long-term contract, securing his future with the London club.

The 18-year-old has been with Arsenal since the age of seven and has come through the ranks at the club’s Hale End academy.

Arsenal made the announcement on their official website on Wednesday, with Saka tweeting to express his happiness over the deal.

“London is my home. Arsenal my team. I’m so happy to finally announce my contract extension,” the teenager wrote on Twitter.

“I love playing for this club and I’m looking forward to what the future holds.. The hard work continues so I can continue living my dream God is Great !!”

Manager of the Emirates club, Mikel Arteta also spoke good about Saka, who had been superb this season for the club, bagging assists.

“Bukayo is a talented and intelligent young player,” Arteta said.

“He has impressed me with his work ethic and attitude to learn and adapt, and it has paid off in his performances. I am excited to continue working with him to develop him further, and for him to help us achieve our goals.”

Saka has now made 33 appearances this season and 37 since his debut in the Europa League in November 2018.

With 11 assists this term, Saka is the first teenager to hit double figures in a single season for us since Cesc Fabregas in 2006/07.

He was on bench as Arsenal thrashed Norwich 4-0 on Wednesday night.