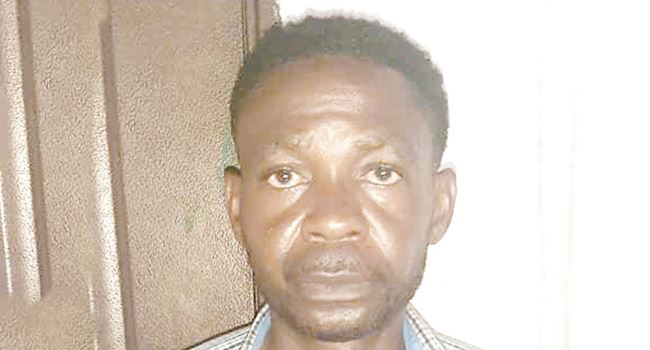 A 48-year-old man, David Idibie, has been arrested by the police in Lagos for allegedly beating his wife, Juliana, to death for receiving a phone call from another man.

According to the State Police Public Relations Officer (PPRO), Olumuyiwa Adejobi, the incident happened in the Ajah area of the state on Tuesday night while Idibie was arrested on Wednesday.

Adejobi in a statement, said the incident occurred at the couple’s residence at Joado Street, Oke Ira Nla, a suburb of the state.

The police spokesman said residents informed the police at the Langbasa Division and detectives were dispatched to the scene where the suspect was arrested.

“The Lagos State Police Command has arrested one David Idibie, male, of Joado Street, Oke Ira Nla, Ajah area of Lagos State, for the murder of his wife, one Juliana Idibie, female, 42, of same address, on 16th February, 2021 at about 10pm.

“It was gathered that the deceased had engaged the suspect in a hot argument on certain matrimonial issues and in the process, she slumped and sustained severe head injury.

“While lying in a pool of blood, the angry husband refused to rescue her until she gave up the ghost.

“The police operatives attached to Langbasa Division, Ajah, who were informed of the ugly incident by a neighbour of the couple, raced to the scene, arrested the suspect and evacuated the corpse to the mortuary.

“The Commissioner of Police, Lagos State, CP Hakeem Odumosu, has condemned the act and vowed to work with other relevant government agencies and non-governmental bodies to tackle domestic violence to a standstill in the state.

“The police boss has ordered that the matter be transferred to the State Criminal Investigation Department, Panti, Yaba, for proper investigation.

“While reiterating his zero tolerance for crimes and criminality, especially domestic violence, CP Hakeem Odumosu admonishes couples to always resolve their differences and conflicts with decorum and maturity as the law will not spare anyone who kills his or her spouse.”

A neighbour of the Idibies who also confirmed the incident, said Idibie had often engaged his wife in a fight after complaining that she was sleeping around with other men.

Related Topics:David IdibieHakeem Odumosu
Up Next