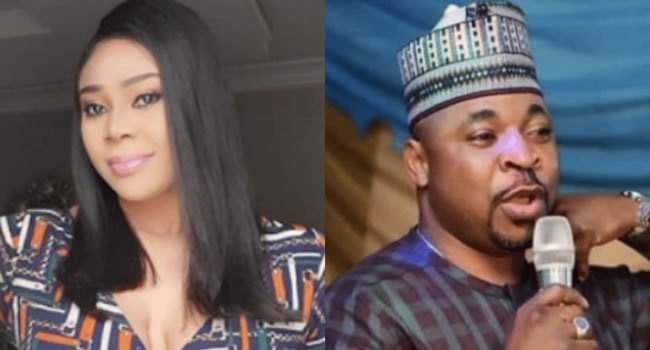 A video of chairman of the Lagos State branch of the National Union of Road Transport Workers (NURTW) MC Oluomo proclaiming his marriage rites with a certain woman has surfaced on social media.

Oluomo, real name Musiliu Akinsanya raised eyebrows after the video emerged online, because the woman in the video was not his lover, businesswoman Ehi Ogbebor.

The quiet ceremony in Lagos is coming several months after Ogbebor, an interior decorator, went public with her relationship with Oluomo.

In the video, MC and the new wife donned the same colours of fabric as Muslim clerics joined them in holy matrimony.

The event truly looked intimate as it was conducted in a small space with few people in attendance which is not typical of Oluomo, considering the NURTW boss’ status in society.

Ogbebor was married as a forth wife to a billionaire, Ken Braimor whom she accused of being a ritualist.

A couple of months ago, she took to the social media platform, Instagram to publish a video on social media to fuel speculations about her relationship with the NURTW chairman, MC Ouluomo.

Get it right…
I don’t care about your freaken opinion.
News or blogging is only credibl when its in secret.
Its aint news… Kiss my ass.
Crazy in love.
Madly in love.
Love see no-fault.
An adult living her life and enjoying the best of it.
There is more important news.

Ehi also celebrated Oluomo’s birthday in a grand style, showing off some of the romantic moments they’ve spent together.

MC Galaxy responds to threats by Skales to beat him up