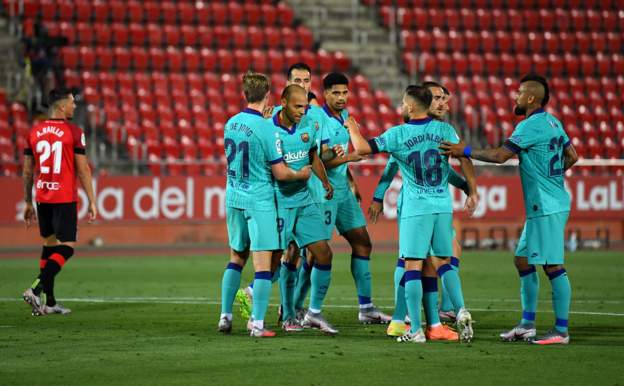 Barcelona made a light walk of Real Mallorca in the La Liga on Saturday, extending their lead at the top of the table.

Star forward, Lionel Messi was among the scorers as the La Liga leaders thumped their hosts 4-0 on their return to the sport.

The Argentine, who returned with a fresh new look, now has 20 goals and 14 assists in La Liga this season.

It was Arturo Vidal who headed the opener before striker Martin Braithwaite doubled the lead with his first goal for the club.

After the break, Luis Suarez came off the bench to make his first appearance since early January, and Jordi Alba made it 3-0 before Messi wrapped it up.

Barca are now five points clear at the top of the table, with second-placed Real Madrid to face Eibar on Sunday.

Football activities in Spain had just returned following a long break, with La Liga suspended since March 10 due to the spread of the coronavirus pandemic.

Related Topics:barcelonaLa Liga
Up Next

One dead, many injured, as soldiers attack COVID-19 committee in Borno