Home » Latest » One dead, many injured, as soldiers attack COVID-19 committee in Borno

A clash between soldiers and members of the Borno State COVID-19 Committee left one person dead, and many others injured, on Friday

The COVID-19 committee members and policemen attached to them were enforcing the ban on interstate travel at one of the entrance gates to Borno State when some soldiers arrived in three gun trucks.

Allegedly threatning to open fire on the COVID-19 committee members led by the state attorney general, and a commissioner of health; the armed personnel disregarded the interstate ban, forced their way through the entrance gate and also allowed hundreds of illegal travelers into the state.

The soldiers, as they forced their way through the barricade allegedly rammed a patrol truck of the State Rapid Response Squad (RRS).

The RRS vehicle, then, somersaulted into the bush, leaving all the local security personnel in the vehicle injured.

The RRS driver later died at the Borno State Specialist Hospital, where he was rushed for treatment.

Equally hit by the soldiers were some commercial tricycles (Keke Napep). The incident also reportedly left three women, one of them a pregnant woman and a baby with fractures.

A photojournalist working with the COVID-19 committee was also assaulted by the soldiers for trying to film hundreds of illegal travellers moving into the state as a result of the action of the soldiers.

Recounting their ordeal in the hands of the soldiers, the Attorney General of the state, Kaka Shehu said:

“We were assaulted today and it is quite unfortunate that it is a federal government law enforcement agency that is responsible.

and soldiers in three gun trucks decided to violate that by forcefully leading passengers into the city.

“They did not only break through the barricades but also assaulted us as a committee. They beat up our cameraman, seized his camera, and attempted to beat up some of the policemen in our committee.

“We did our best to calm the policemen, while I tried to confront one of the soldiers to remind him of the consequences of their action. But to my greatest surprise, the soldier looked at me and told me he doesn’t care about our ‘useless democracy’.”

The state deputy governor and chairman of the COVID-19 Committee, Umar Kadafur, who later arrived at the scene of the clash told newsmen:

“This is highly condemnable and should not be allowed to repeat itself again. We have conferred with the garrison commander and made it clear to him that we won’t allow any soldier to undermine our authority and the orders of Mr President. Hence we will pursue the case to its logical conclusion until we see that those soldiers face disciplinary action.

“However, we as a committee, and government, appreciate the sacrifices of the Nigerian military and we will do everything to support them, but we will not tolerate indiscipline in our state.”

The deputy governor later went to the hospital where those injured as a result of the action of the soldiers were receiving treatment.

However, soon after he left, the state commissioner of health announced “We have just received a report from the hospital that the injured RRS driver had passed away.”

He described the news as very sad, regretting that “all this happened because some soldiers chose to break the law.”

He added, “We are doing our best to stem down the spread of the pandemic, that’s why we are enforcing the ban on interstate travel.

“The cases of COVID-19 are on the rise and most of the new cases are from the travel violators whose blood sample we took while they are in the quarantine facility.” 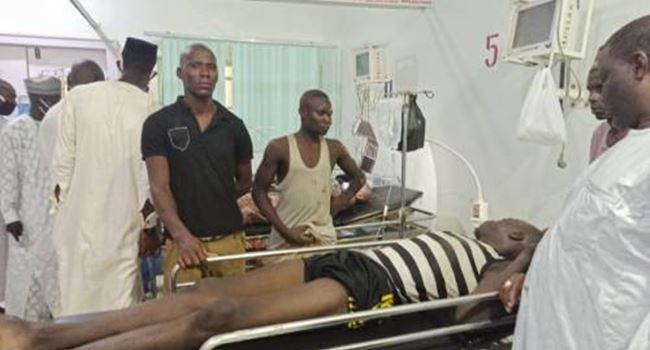