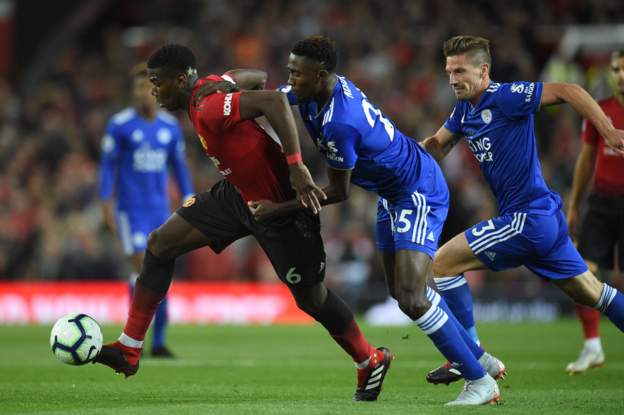 ​​Super Eagles duo of Wilfred Ndidi and Kelechi Iheanacho were in action for Leicester City as they fell 2-1 to Manchester United on Friday night.

The encounter was the opening match of the 2018-19 English Premier League season, and Leicester proved tough but could not take any point away from Old Trafford.

The hosts got off a perfect start to their campaign. They went ahead early in the game from a converted penalty by captain Paul Pogba.

The visitors searched diligently for an equalizer but were stopped twice by goalkeeper David De Gea.

Luke Shaw later doubled the lead for the Red Devils when he scored his first-ever career goal in the 83rd minute, before substitute Jamie Vadie pulled one back for Leicester in injury time.

It is the third season in a row that Leicester City have conceded the opening goal of the season.

The Foxes lost to Hull in the opening game of the 2016-17 season and to Arsenal in the first game of the last campaign.

Jose Mourinho’s men kicked off their Premier League campaign with a win despite not having been in the market this summer.

“It’s important to win and play well, we played well in periods against a good team that invest more than us,” United boss Mourinho said after the game.

“It will be a difficult season for everybody, not just for us. I had my plans for many months and I find myself with the market closed in a situation I did not think I would be in.

“That’s football management. I think football is changing and managers should be called head coaches. We have to wait until the end of November to understand if we can fight for the title,” he added.

Ndidi backs Leicester to bounce back after defeat to Man Utd