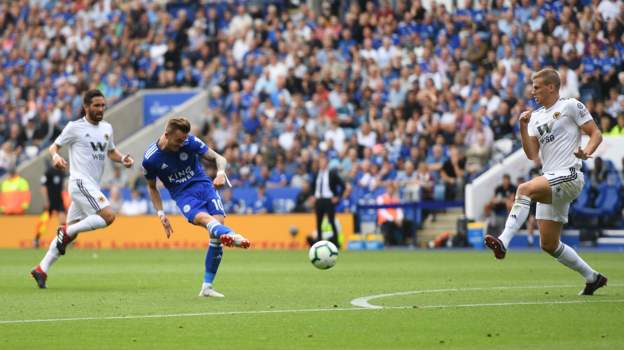 Super Eagles duo of Wilfred Ndidi and Kelechi Iheanacho were both in action at the King Power Stadium on Saturday when they sealed a 2-0 victory over Wolverhampton Wanderers.

While Ndidi played from the start to finish, Iheanacho was brought in in the 82nd minute for goalscorer James Maddison.

The Foxes had kicked off their season with a 2-1 loss to Manchester United last weekend, but went ahead of Wolves via a 29th-minute own goal by Matt Doherty.

Maddison doubled their lead at the stroke of half time, but the hosts ended the game with 10 men, as English striker Jamie Vardy was sent off on 66 minutes.

Elsewhere, Tottenham Hotspur defeated promoted side Fulham 3-1 to continue their perfect start to the season.

Spurs had gone ahead with a Lucas Moura goal in the 43rd minute before
Aleksandar Mitrovic levelled minutes after the break.

Then two quick goals by Kieran Trippier and Harry Kane sealed the win for the home side.

Also, Everton saw off Southampton 2-1 at Goodison Park, while West Ham were beaten by visiting Bournemouth, who came from behind to seal a 2-1 win.