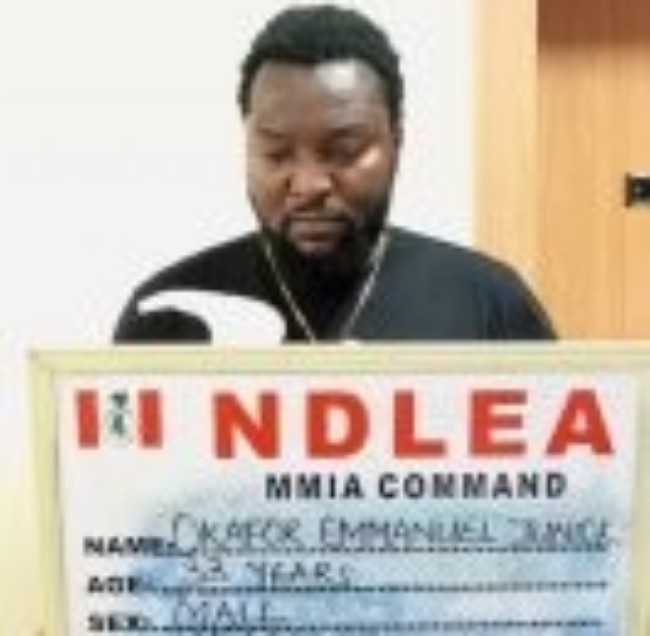 The NDLEA Director of Media and Advocacy, Femi Babafemi, who confirmed the development in a statement on Sunday in Abuja, said Okafor was arrested on arrival from Sao Paulo, Brazil, via Addis Ababa.

He added that the suspect flew into the country on an Ethiopian Airlines flight.

Babafemi said the suspect had 1.4kg of cocaine concealed in the handles of his bags and in the top edges of the bags.

The spokesman said: “The 33-year-old indigene of Arochukwu Local Government Area of Abia State was arrested on September 26 after anti-narcotic officers unravelled where he concealed the illicit substance.

“During preliminary interview, Okafor said he was a footballer at the University of Nigeria Teaching Hospital, Enugu FC, where he played for four seasons before leaving for Sri Lanka in 2014.

“The suspect said he moved to Brazil from Sri Lanka after playing for two seasons, but could not advance his football career in Brazil as he did not have official documents.

“Another Brazil returnee, Chinedu Ibeh, was also arrested on September 26 upon arrival at the Lagos airport from Sao Paulo, Brazil, also via Ethiopian Airlines.

“Ibeh hails from Ahiazu in Mbaise Local Government Area of Imo and was found to have concealed 3.2kg of Black Cocaine popularly known as ‘Lucci’ in false bottoms of his two bags.

“In his statement, he said he was to be paid N3.1 million on successful delivery of the drug in Nigeria.”

Nigerian doctor detained in Saudi Arabia cries out for help