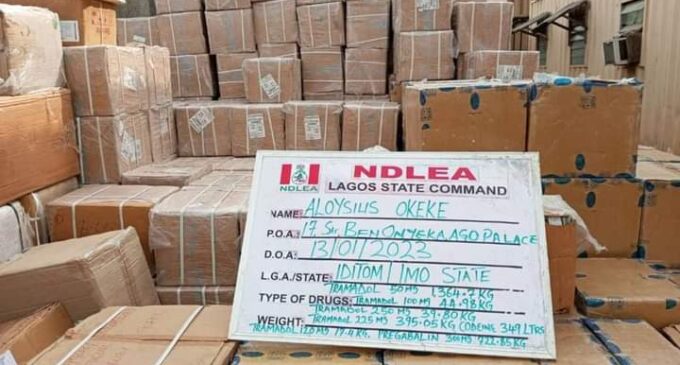 The National Drug Law Enforcement Agency (NDLEA) has confiscated a large consignment of illicit drugs worth N5 billion at a warehouse in Lagos State.

The NDLEA Director of Media and Advocacy, Femi Babafemi, who confirmed the development in a statement on Sunday in Abuja, said two suspects had been arrested in connection with the seized substances.

He added that the agency’s operatives seized tablets of tramadol and other drugs linked to the warehouse located at Amuwo Odofin area of Lagos in separate raids.

The statement read: “Operatives of the National Drug Law Enforcement Agency (NDLEA) at the weekend busted another Tramadol cartel in Lagos with the seizure of millions of opioids pills and bottles worth over Five Billion Naira (N5 billion) from their warehouse in Amuwo Odofin area of the state and arrest of two of the kingpins.

“The drug cartels took the first heat on Tuesday, 10th January, from determined officers of the agency who intercepted an imported consignment of Loud, a strong variant of cannabis, weighing 4,878.72 kilograms along Awolowo Road, Ikoyi, Lagos.

“This was followed by the seizure of 121,630 pills of pharmaceutical opioids and some quantity of Molly from a dealer, Charles Okeke, on Wednesday, 11th January, at Idumota area of Lagos Island.

“Another effort by the agency to bring the drug cartels to their knees paid off on Friday, 13th January, when operatives tracked and located a major warehouse for pharmaceutical opioids at 17, Sir Ben Onyeka Street, off Ago palace way, in the Amuwo Odofin area of the state, while the owner of the store, Aloysius Okeke was arrested.