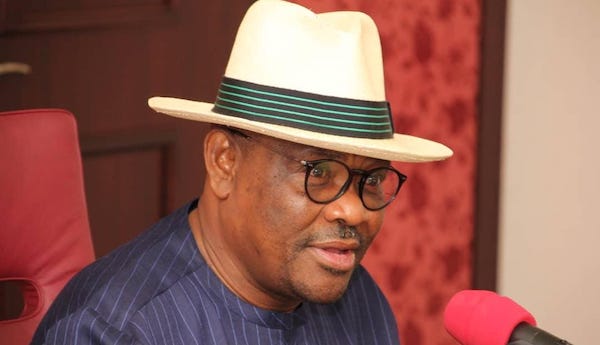 Rivers State Governor Nyesom Wike on Thursday decried the state of Nigeria at 60 years after independence from colonial rule.

Wike lamented that Nigerians, since the end of the civil war, had never been so divided, despondent and distressed as they were currently.

The speech read in part: “At independence, our founding fathers envisioned to build our nation with due regard to our diversity and with visionary enthusiasm provided the basic building blocks for sustaining a united, peaceful and prosperous Nigeria in the foundational constitution documents.

“We had democracy, regional autonomy and fiscal federalism as the guiding principles for political, social and economic relations between the central government and the constituent regions.

“No one part or region was deliberately denied against what was due to it; neither was any ethnic nationality politically and economically unduly favoured above all others by the central government.

“Above all, the regions controlled their resources and were engaged in healthy competition for development and transformation while remaining loyal to the corporate existence and progress of the Federal Republic.

“Under these arrangements, Nigeria thrived on a peaceful and progressive path and as great author, Chinua Achebe, once affirmed: “there was a country” at least in the First Republic, when true federalism and regionalization of political power and resources held sway.

READ ALSO: #IndependenceDay… No past govt has done as much as we are doing –Buhari

“Unfortunately, the fundamental foundational principles of negotiated constitutionalism, regional autonomy, and fiscal federalism were blatantly jettisoned by long years of misguided military incursions and adventurism into the nation’s body politics.

“Although the military has since vacated from politics over 20 years ago but the constitutional, political and economic substructures they mischievously imposed on us, especially the inherent error of commission or omission in the nationalization of communal lands and resources, have continued to challenge and diminish the nation’s fragile peace, unity and socio-economic progress.

“And so, 60 years after independence, nation-building remains a far cry and the lofty goals and aspirations of our founding fathers for a politically transparent, economically healthy and socially peaceful and prosperous nation remain betrayed while the way to a glorious future is arrested.

“No one is in doubt about the fact that ours is a nation blessed by God with enormous human and natural resources, yet, after 60 years of self-rule we are still held behind as a nation teeming with one of the poorest and helpless population in the world with an average income per capita of less than a dollar per day.

“And then, violence, banditry, rampant killings and insecurity continue to plague and ravage sizeable parts of our country for over a decade, destroying communities, farmlands and causing massive dislocations and untold sufferings to already desperate and hapless populations.

“Never in our history since the end of the civil war have Nigerians been so divided, despondent and distressed with prognosis that clearly point to the fact that the cracks are getting deeper in the much-strained, abused and debased walls that have managed to hold this nation together.

“As things stand now no one can really predict the future survival of this nation if we continue to maintain this nebulous, rigged and generally rejected federal system through corruption, repression and the abuse of both legitimate and illegitimate state institutions.

“We may as usual choose to gloat in the limited progress we have made since independence, especially the relative expansions in access to education, healthcare and other socio-economic infrastructures without giving any considerations to the serious challenges preventing us from building a free, fair and just nation that would command the total loyalty of all nationalities above all other interests.”

IPOB claims citizens complied with its sit-at-home order in South-East, others