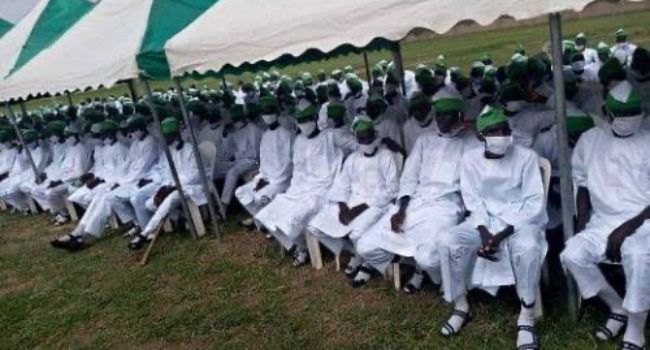 According to the Nigerian Army, the Nigerian government in conjunction with the Borno State government, is currently rehabilitating over 80,000 repentant Boko Haram terrorists in three camps while a fourth one is nearing completion.

The Theater Commander of the Operation Hadin Kai, Maj. Gen. Chris Musa, while addressing newsmen on the activities of troops in the past week on Saturday in Abuja, said so far, the number of surrendered Boko Haram terrorists has hit over 80,000 who are being taken care of by the Federal Government, in collaboration with the military and the Borno government.

“The military, Operation Hadin Kai is working together with the Federal and Borno State government to take care of over 80,000 repentant Boko Haram terrorists who voluntarily surrendered.

“On the point of impact, when the terrorists come out, they report to the closest unit and the commander takes him and his men and they are profiled and disarmed,” Musa said.

“The state government provides transportation that takes them into Maiduguri where we have three camps. The fourth camp is being constructed. We are not directly involved in their administration and management. The state government takes care of them. We simply take care of perimeter security to ensure nobody comes in or goes out,” he added.

The rehabilitation of repentant terrorists was put in place by the President Muhammadu Buhari-led administration in 2016 with the establishment of “Operation Safe Corridor” and given the mandate to deradicalise and rehabilitate repentant Boko Haram fighters.

Though many Nigerians have continued to criticise the system of using tax payers money to rehabilitate terrorists who have killed hundreds of thousands of innocent people, the government has stuck to its guns and have gone ahead to spend huge sums of money to train the repentant insurgents.

Man stabs rival to death over girlfriend in Adamawa