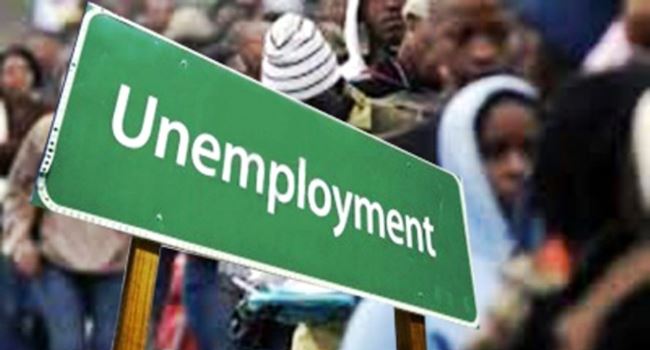 Nigeria’s unemployment rate is seen climbing to 30% by the end of the year as the pace of economic growth in Africa’s biggest economy slows further.

Multinational professional services firm, PricewaterhouseCoopers (PwC), foresaw in its September economic alert publication obtained from its website on Saturday , that unemployment could soar to 28% in the third quarter.

The statistics office had in August reported Nigeria’s unemployment rate stood at 27.1% in the second quarter, the first time it would issue such data in six quarters.

PwC analysts said a projected real Gross Domestic Product (GDP) of almost N280,000 is needed to absorb a single employed individual from Q2 2020 to Q4 2020 on account of the economic impact of the coronavirus pandemic.

The accounting firm leant on the International Monetary Fund’s forecast that the GDP will tighten by 5.4% in making its assumptions, adding that the labour force could expand to 80 million come year end.

“Some of the factors that account for the rise in the unemployment and underemployment rates include the low level of industrialisation in the country, slow economic growth, low employability and quality of the labour force, slow implementation of the national labour policy, in addition to lack of coordinating labour policies at the subnational level,” PwC said.

It prescribed devotion to labour programmes embedded in the NESP and the National Employment Policy as curb for high unemployment rate in the country.

Yet, PwC noted that labour initiatives are not adequate in themselves in absorbing Nigeria’s present unemployed citizens, much less the emerging population that will join the labour force in the nearest future.

Fiscal labour programmes are only seen as standing the chance of augmenting economic reforms that sharpen up industrialisation and MSMEs development in easing unemployment.

“Industrialisation and the entrepreneurial drive are crucial to solving the unemployment crisis in Nigeria; and again, both factors are preconditioned on the performance of the economy and government’s willingness to ease the process of doing business.

“…as a recommendation, improving the skills of the Nigeria labour force can reduce the unemployment rate. This also depends on the educational institutions in Nigeria, and the quality of the curriculum, in the light of STEM and the fourth industrial revolution,” the report said.