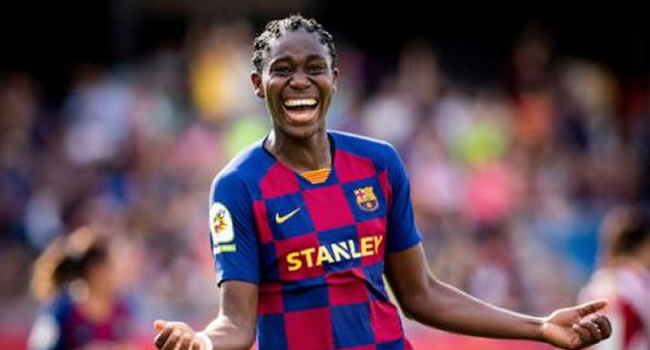 Super Falcons forward, Asisat Oshoala has bagged yet another Spanish women’s league title with Barcelona after they thrashed Real Madrid 5-0 on Sunday.

The Barca Ladies have now won a total of seven titles in the Primera Division, putting them two ahead of their nearest rivals Athletic Club.

Sunday’s triumph means that the Catalan club have won the title for the third time in a row.

Barca, who have a 100% record in the league this season, are 22 points clear at the top with six games left.

Nigeria’s Oshoala, who has been nursing an injury but recently signed a contract extension, was absent in the game but joined in the celebrations after the win.

Ballon d’Or winner Alexia Putellas scored twice at the end of the first half to put the hosts in control.

Goals from Patri Guijarro and Jennifer Hermoso, along with Babett Peter’s own goal, saw Barca win the title in style.

Barca Ladies have been unstoppable in the league this season, winning all 24 of their games played so far, scoring 136 goals and only conceding six.

They remain on course for four trophies this season, including the Champions League and the Copa de la Reina, after winning the Spanish Super Cup in January.