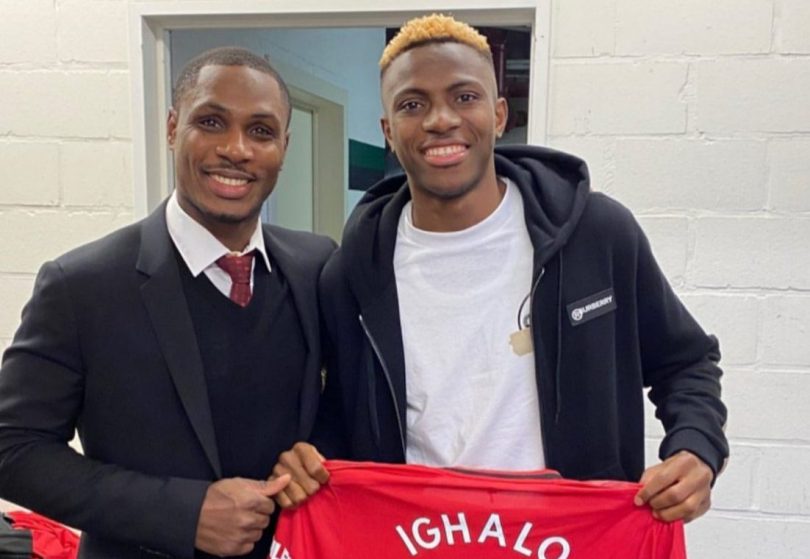 Ighalo, who pulled out from the national team after helping Nigeria finish on third spot at the 2019 Africa Cup of Nations (AFCON), is yet to make the decision to return.

The on-loan Manchester United star has scored four goals in eight appearances for the Old Trafford club, and there have been calls for him to rescind his retirement decision.

Osimhen made only one appearance at the 2019 AFCON, as he only had the chance in the third place match after Ighalo was injured and taken off.

But the Lille of France forward says he would not mind playing from the bench should Ighalo make up his mind.

Read Also: Ighalo must consult with family if he’s to play for Nigeria again —Brother

“He is always welcome, he contributed a lot for the National team and even at the Afcon in 2019, whether I am playing or I’m on the bench, watching him from the side will also help me learn a lot from him. I have no problem with it at all,” Osimhen told ojbsport.com.

“Ighalo is a very good forward and inspirational player, not just for Nigeria but also for the footballing world. I draw some inspiration from him”.

Osimhen has been at his best this season, scoring 18 goals and making six assists in all competitions for Lille, and was recently voted as the best player of the year at the French side.

There had been reports of the 21-year-old agreeing to move to Serie A side Napoli, but in a chat with the BBC, Osimhen has denied it.

“There’s a lot of fake news about me already agreeing a deal with Napoli – it’s sickening.

“Please disregard any report of transfers involving me on the news. I want to stay mute on all these as I mourn my late father,” he said.