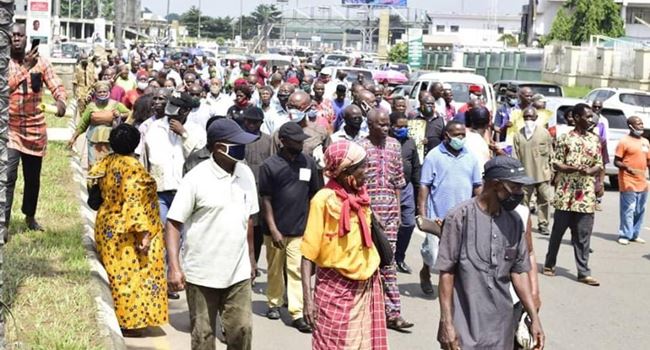 Aggrieved pensioners in Imo State on Tuesday protested the non-payment of their pensions and gratuities by Governor Hope Uzodinma-led government of the state.

The pensioners, who blocked the entrance of the government house in Owerri, the state capital, said no less than 42 of their members had died as a result of hunger following the Uzodinma government’s refusal to pay them their pensions.

They said the government since February, 2020 had not paid them.

The protesting pensioners, who made efforts to enter into the government house but were prevented by security agents, accused Governor Uzodinma of insensitivity.

One Mr Iyke Ohaneje, who said he was the chairman, Imo State Pensioners Intervention Committee, told newsmen that all efforts the association made to receive their pensions and gratuities were frustrated by the office of the accountant general of the state.

“As at the last count, 42 members of this association have died of hunger, excluding the ones in the rural areas. Government agents have frustrated every move we had made to get our pensioners paid to us.

“Just the other day, a Civil Defence officer at the accountant general’s office shot at us while we went to demand our pensions. He shot at us because he has a small gun whereas this is an officer who is supposed to be civil.

“We have written to everybody, including journalists, lawyers, Bishops, asking them to prevail on the state government to pay us our pensions and gratuities,” Ohaneje said.

GOVERNANCE BEYOND COVID-19: Back to Kwara