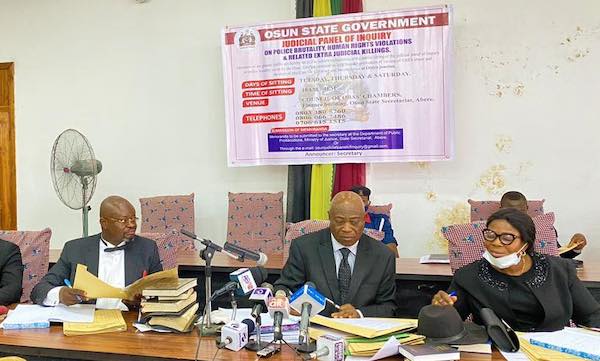 A petitioner, Mr. Teslim Ibitoye, on Thursday told the Osun State Judicial Panel of Inquiry on Police Brutality, Human Rights Violations, and Related Extra-Judicial Killings how the police killed his younger brother, Akeem Olakunle Ibitoye and rendered him physically challenged over an offence he said they knew nothing about.

The widow of the deceased, Kafayat Ibitoye, also begged the panel to order the police to release the corpse of her husband for burial, claiming that her husband’s corpse had been detained since 2017.

According to Ibitoye, he was shot three times at different parts of the body by the police while his younger brother, Akeem, who sustained degrees of gunshot injury, gave up the ghost immediately.

The petitioners, who had approached the panel for justice, decried the brutality meted out to them which, according to them, had thrown the family into “everlasting sorrow and irreparable loss”.

He said: “On this fateful day, my younger brother and I went to see our cousin, one Mr. Nureni at Erin-Osun. Though we didn’t meet him at home, when we called him, he asked us to wait for him. But immediately he joined us, all I heard were gunshots. I couldn’t phantom were the gunshots were coming from. All I could remember was that I suddenly became unconscious.

“The three of us were taken into the vehicle i.e. myself, the corpse of my brother who died immediately, and our cousin. It was when I was laid in the vehicle that I partially woke up and saw the policemen who were accusing us of kidnapping.

“I was taken to the hospital immediately and when I regained consciousness, we were taken to the Police State Command, Osogbo, where the then Commissioner of Police ordered proper medical treatment.

“But to my surprise, after few weeks, some officers sneaked us out of the Command and I was taken to Abuja where I spent few days.

“When I got to Abuja, I was handed over to Abba Kyari, the head of Police Intelligence Response Team, who, after seeing my health condition, asked them to take me to the hospital. I was eventually admitted to General Hospital, Gwagwalada, Abuja, where I spent several days on the sickbed.

“I was discharged from the hospital on the 1st of August, 2017 after which I was taken to State Anti-Robbery Squad Headquarters where I spent two weeks before I was eventually released.

“We took the matter to the High Court, Osogbo, after my release but I was not satisfied with the judgement as the matter was struck out unjustly. Though the interpretation of the judgement was that our arrest at that material time was because of the proliferation of kidnapping.

“So, we have come here to seek justice. Our hope lies heavily on the outcome of the panel on this case, because the corpse of my brother is still in police custody since 2017, close to four years.

“I am appealing to the panel to prevail on the police authorities to release the corpse to us and arrange how I will be flown abroad to receive medical operation because since the incident occurred, I have been carrying a life bullet in my spinal cord, and all efforts to get it operated in Nigeria proved abortive; and I have been advised to go overseas for the operation.”

The petitioners also prayed the panel to award them reasonable compensation to cuushion the effect of all that had happened to them.

Before the resumed sitting on Thursday, the panel had directed the two parties through their counsel to visit and confirm if the corpse was still in the morgue, at the State General Hospital, Osogbo, where the corpse is preserved.

At the resumed hearing on Thursday, the Counsel for the respondent, Barrister J. Idoko, confirmed the existence of the corpse at the morgue, a claim that was affirmed by the petitioners.

However, the Chairman of the panel, Justice Akin Oladimeji, said the case would not be continued due to the absence of the petitioners’ counsel who had earlier informed the panel of another engagement adjourning the case till March 1, 2021.

Related Topics:OsunOsun State Judicial Panel of Inquiry on Police BrutalityPolice brutality
Up Next